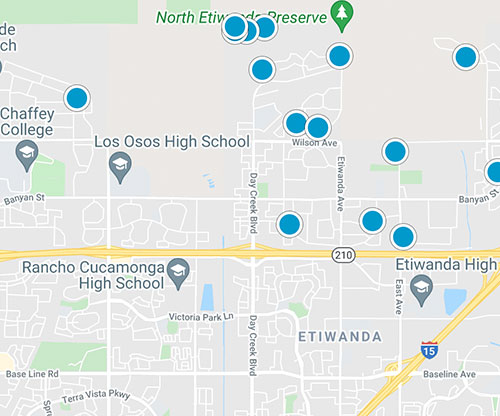 There’s a reason why purple grapes are so conspicuous on the city seal of Rancho Cucamonga—vineyards and wine-making are more central to the Cucamonga character and identity than even the citrus boom that famously swept across the entire region in the late 19th and early 20th centuries.

Nestled at the base of Mt. Baldy and the San Gabriel and San Bernardino mountain ranges, this city of about 165,000 belongs to the Cucamonga-Guasti Wine District, which first started vineyards in the 1830s and was once considered one of the largest wine-growing regions in the country.

The city honors this tasty heritage late in August with its annual Grape Harvest Festival, which celebrates the cultivation of many grapes, especially Zinfandel, that have thrived here over the years  (it’s no accident that you’ll find streets named Grapevine and Zinfandel in the city limits!) Athletes can also compete in the Grape Stomp Triathlon—a 5k run, 8-mile cycling and 100-yard swim—although the predominant beverage served to runners there, of course, is water.

Why has the city grown into a popular home-buying destination in the past two decades? City official have managed to blend a variety of businesses and uses without losing the community’s small-town feel. In the past five years, in fact, Rancho Cucamonga was even voted as one of the top 100 best places to live in a study from Money magazine and CNN.

The median income of families in the city is about $76,000, and like its neighboring communities of Fontana, Norco and Ontario, the wide-open spaces that once gave the young city an agricultural identity are now serving companies as large distribution centers. You can find many of these in the area of Milliken Avenue and the stretch between Archibald and Etiwanda Avenues.

Many cities in Southern California have at least one thing in common: a traditional, historic downtown, but that was never the case for Ranco Cucamonga. So, while cities like Upland or Ontario have always enjoyed an original, commercial center of town, Rancho Cucamonga had to do the next best thing: Build one.

The result? Victorian Gardens on the east side of the city -- a sprawling network of shops, theaters, pedestrian access, open spaces and restaurants all embracing some of the more familiar elements of urban design shared by surrounding cities. It’s proved to be a wildly popular place not only for locals but for visitors as well , demonstrating that the old maxim “if you build it, they will come” isn’t just true for baseball.

Speaking of baseball, Rancho Cucamonga residents hungering for some dramatic, high-energy baseball -- but don’t want to drive out to Anaheim Stadium or Chavez Ravine -- have a great alternative right in their backyard: The Epicenter, the home stadium of the minor-league baseball team the Rancho Cucamonga Quakes.

$610,000
3 Beds ⋅ 2 Baths ⋅ CV22111265 MLS ⋅ Active Status
Please come see this rare 3 bedroom 2 bath single story ranch style home on a corner lot. Enjoy the beautiful mountain view from the front side of this home. This one has tons of potential for that lucky buyer who sees all of the possibilities that this home has to offer. In addition to the 2 car attached garage there is ample parking on the eastside along with RV parking. Included in this sale is a newer “Tuff Shed” built to last designed to store your important items. This corner lot provides you with essentially 3 separate yards which surrounds the house. Arrange to see this house today and make it your next home!

$525,000
3 Beds ⋅ 3 Baths ⋅ EV22111386 MLS ⋅ Active Status
Welcome to the beautiful Rancho Cucamonga! This townhome is absolutely wonderful! Boasting 3 bedrooms and 2.5 bathrooms with an attached 2 car garage! The sellers are the original owners and are actually members of the board of directors for the community HOA. With lush parks, a community pool, spa, and club house. The HOA are very caring and not only take care of the external parts of the building but also trash and landscaping. The community is quiet and peaceful which adds to the already beautiful and well-maintained interior with newer AC unit. Don't hesitate to call and inquire about this wonderful townhome in the center of gorgeous Rancho Cucamonga!

$650,000
3 Beds ⋅ 2 Baths ⋅ CV22108888 MLS ⋅ Active Status
This charming 3 bedrooms, 1.5 bath home is perfect for anyone looking for a well maintained, low maintenance home. Situated in an established, quiet neighborhood only a block from the Pacific Electric Trail and close proximity to schools. You also have convenient backyard access to Red Hill Community Park where they show outdoor movies and host concerts in the park. The moment you pull-up in front of this home, you’ll see the lovely manicured yard with beautiful mature plumerias, a nice wide driveway and two car detached garage toward the back which offers plenty of parking spaces or room for the kids to play. As you enter through the front door, you're greeted with a nice corner fireplace and original hardwood floors. Must see to appreciate the many upgrades that include: Central A/C (2019), Insulated exterior walls (2016), And new radiant barrier roof (2019). The nicely sized backyard has fruit trees, a view of the Foothills, newer landscaping with cement pad and fencing (2017), Central sprinkler with rain detector and drip system (2019). This home also has window coverings and ceiling fans throughout...as well as a whole house fan to help cool those warm Summer nights. MOVE IN READY!

$1,499,950
5 Beds ⋅ 5 Baths ⋅ CV22109730 MLS ⋅ Active Status
Welcome to the beautiful and prestigious city of Alta Loma! Luxury at its finest. Located in the northern part of Rancho Cucamonga, this SINGLE STORY, 5 bedroom 5 bath home has been completely updated throughout. This home is a custom-built estate with a five-car garage, including RV and/or boat parking. Kitchen has modern stainless-steel appliances, granite countertops, and a beautiful craftsman-style large island with a 36” lazy susan that can seat up to nine guests. New wool Berber carpets and Italian porcelain tile throughout. This home includes three fireplaces and a butler’s pantry with a wet bar. All bathroom vanities have matching granite countertops. Master suite has marble floors and Jacuzzi jet bathtub and his and her walk-in closets. This estate comes with five high-definition smart TVs with a high-end surround sound system that plays music throughout multiple rooms along with the pool and patio area. The backyard provides the most spectacular view of the city, especially during sunset. The pool features an infinity-edge, with multi-colored sparkling polished glass beads. The pool also has eight bar stools, each with its own adjustable Jacuzzi jet. An outdoor shower is also included for guests to rinse off after a swim. The patio boasts a large outdoor kitchen/BBQ Island with stainless steel appliances. The patio cover also includes a heavy-duty mister system, perfect for those hot summer days. There are two outdoor storage sheds along with forty-one fruit trees with an automatic, timed watering system. Varieties include: lemon, lime, oranges, tangerines, kumquats, avocado, peach, nectarine, plum, and blackberry bushes. On the east yard is a mature vineyard of Napa Valley Red Zinfandel vines. In the 2021 harvest, they produced over 600 pounds of wine grapes. This vineyard has produced an award-winning wine at the L.A. County Wine Festival. All the windows are protected with “Enviroblind” steel motorized remote-controlled shutters. One single garage has been converted into a processing and food storage area with granite countertop and deep sink. Approved addition plans for a game room and garage extension are also included. This home is an absolute dream for the family and for hosting guests. Please be sure to check out our video tour!