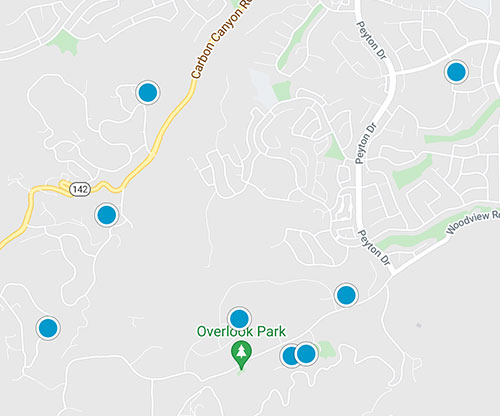 The rolling landscape of Chino Hills once lent itself to use by dairies and for equestrian activities, but all of that has changed. Development since the 1970s has turned this quiet, rural city in the southwestern corner of San Bernardino County into a popular residential community embracing country life even while being nestled in the busy, metropolitan region of Southern California.

With a population of about 75,000, Chino Hills preserves its residential, village-like identity: That's why the city has been voted one of the best places to live by Money Magazine.

That doesn’t mean anyone living there will feel isolated, however: In fact, several freeways connect the community with the surrounding area, including the 71 Chino Valley Freeway, which gives motorists easy access to both the Pomona 60 and Riverside 91 freeways. For commuters who decide to make Chino Hills their home, Los Angeles is only 30 miles to the west, while Anaheim is 24 miles to the southwest and Riverside 25 miles to the east.

Chino Hills is an ideal place for raising family, but don’t just take the FBI’s word on this—the bureau ranked Chino Hills as 13th safest city in the U.S. in 2008—look at the city's schools as well. The city prides itself on supporting a top public school district, Chino Valley Unified School District, which is a leader in the county when it comes to results in the state’s API – Academic Performance Index.

When it comes to the great outdoors, the city encourages its citizens to embrace it. Take, for example, the 33-acre Big League Dreams Chino Hills Sports Park, a multi-use sports facility attracting tournaments and plenty of visitors year round. There's also the McCoy Equestrian & Recreation Center, where horsing enthusiasts can enjoy a 20-acre facility with two lighted arenas, covered bleachers, a gazebo, a community building and trail connections.

There’s no better brand in golf than the name of Greg Norman, and Chino Hills is the place where you’ll find Vellano Country Club, featuring an estate housing development and private golf courses designed by the Australian champion. The city might be far from the beach, but in the case of Norman's Vellano complex, this is one time when the presence of “The Shark” is most welcome!  Chino Hills Ca 91709 homes for sale.

$904,000
CV22111830 MLS ⋅ Active Status
Carbon Canyon Land with incredible views of the ocean and Catalina island when weather cooperates! 2 adjacent lots containing 2 home pads to either combine or build separate 1 acre estate homes on with panoramic views of the hills. Soils report was completed showing preferable soil direction for building but has expired. Property is accessible via private paved road. These private pads are minutes away from all Orange Count. Properties and corner boundaries just surveyed. Lots are deeded separately and can be sold separately but seller would prefer to sell together. APN 1000-132-04-0000 is the upper 1.3 acre lot and 1000-132-06-0000 is the lower 1.0 acre lot. These private lots lie minutes away from the North Orange County Lines yet afford you a much more exclusive feel.

$650,000
2 Beds ⋅ 1 Baths ⋅ PW22110094 MLS ⋅ Active Status
Hidden Gem in Chino Hills! This property sits on 1.5 lots with a 2-bedroom 1 bath home, 3rd bedroom can easily be reverted. Currently there is a den/dining room and a big walk-in closet. The home has a beautiful custom front porch, new flooring and carpet, double pane windows throughout, ceiling fans, tankless water heater, hook-ups for a water softener, gas and wood burning fireplace. In the backyard there is a built-in fireplace with plenty of space for your family and friends, a garden with a grapefruit and fig trees and a blackberry vine. The RV garage in back boasts 900 sq ft. Park your RV or make it into a man cave, workspace or another living space. It has a bathroom, running water & electricity. It’s wired for an air compressor, has a clean out for the RV and a new roof with permits. Close to freeways, shopping, restaurants and churches.

$1,388,000
4 Beds ⋅ 4 Baths ⋅ PW22098082 MLS ⋅ Active Status
This stunning residence is located in the gated community of the highly desirable Pine Valley Estates of Chino Hills. This executive property sits on an 7559 sq ft lot and offers 2896 sq ft of living space. 4 bedroom 3.5 bathrooms, with a bedroom suite on the main floor. As you walk into the property you will be gently greeted by all the natural light pouring through the impressive open concept living space. The kitchen is built to perfection with all high end appliances which makes entertaining and family gatherings effortless and enjoyable. The luxurious upstairs primary bedroom holds two walk-in closets, dual vanities, a shower wet room, and a center bathtub. The spacious loft upstairs can be perfect for kids entertainment or easily be converted into a 5th bedroom. The private backyard with a custom fireplace can entertain family BBQ’s and outdoor activities. The property is minutes away from Veterans Park, Western Hills Country Club, Costco, Chino Hills Shoppes, highly sought out Gerald Elementary, Canyon Hills Junior High School, and Ayala High School. 15861 Canon Ln is truly a Chino Hills gem and you don't want to miss it!