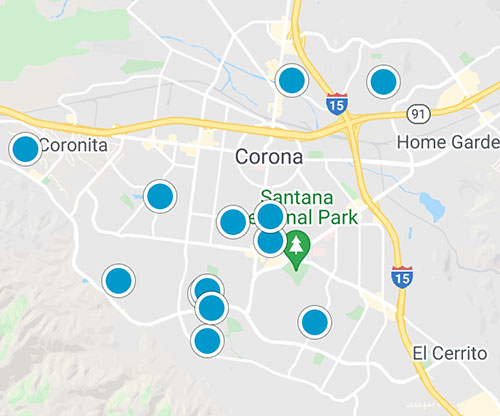 Take a drive on Grand Boulevard in Corona, and your four tires will be in touch with history.

Are you curious about the origins of the city’s name? Well, as any good dictionary will tell you, a corona is a halo -- and so is the circular shape of that important boulevard, which sits at the center of this community of more than 150,000 people in Riverside County.

While the city’s historical past has much to do with offering a single precious agricultural commodity—namely, land—today Corona enjoys rising status as a bedroom community used by many of cities of the Inland Empire and Orange County.

In recent years, in fact, Corona’s community has grown so diverse thanks to the arrival of more African American, Latino and Asian American families that the city’s old labels of “the circle city” and “lemon capital of the world” have been easily replaced by another: Today Corona has earned the title of a “global village.” The children of these families are served by Corona-Norco Unified School District as well as by various private schools in the city.

Corona’s success in commerce and industry has been helped by its access to the Riverside Freeway as well as the linkages to the Pomona and San Gabriel valleys provided by the Chino Valley Freeway.

The city also enjoys a reputable profile in various business sectors.. Anyone who’s ever plucked a Fender electric guitar or chugged a Hansen’s soda should also know that both corporations have their headquarters in Corona. The city also has several major shopping areas, including The Crossings at South Corona, The Promenade Shops at Dos Lago and Corona Hills Plaza and Marketplace.

Dial back the clock to the mid 20th century, however, and you’ll find that the city was a quieter, rural place—and this made it an enjoyable home for major celebrities, like Cuban bandleader Ricky Ricardo and his redhead wife Lucy – ah wait, make that Desi Arnaz and Lucille Ball, who once lived together on a ranch in the southern part of the city. If Corona was ideal for one of the greatest couples in comedy, it just might be the place for you.

$350,000
2 Beds ⋅ 2 Baths ⋅ IV22111216 MLS ⋅ Active Status
Welcome to this mature, affordable living, 55+ resort community where you own the land. This home is available for financing as it is 433A certified on a permanent foundation. Beautifully appointed and upgraded with an open floor plan. Enjoy the wood laminate flooring throughout the living room, dining room and kitchen as you entertain guests. Each bedroom features its own attached bathroom and are filled with natural light. There is a separate laundry room with storage. Additional features include vinyl glass slider, copper plumbing, upgraded kitchen and bathrooms. Small HOA that includes a large clubhouse with kitchen, heated pool and indoor spa, gym, two lakes and peaceful greenbelt walking paths. Great location near the 91 FWY, toll roads, grocery and drug stores and restaurants. This is an amazing home and takes senior living to a whole new level.

$869,000
4 Beds ⋅ 3 Baths ⋅ AR22106327 MLS ⋅ Active Status
Welcome to a highly desirable Eagle Glen community in Corona. Featuring 4 bedrooms, 3 bathrooms, dining room, laundry room with plenty of storage space, open floor plan with kitchen overlooking the family room. Kitchen has granite counters, plenty of cabinet storage, breakfast nook looking out to the backyard. The back yard has plenty of room for all your outdoor furniture and entertaining. Attached three-car garage with extra space for storage on the side and direct access to the home or side yard. Located near award winning schools, shopping, restaurants, golf courses, easy freeway access to 15 fwy and 91. NO HOA. This home has so many unique features, and many more impossible to mention, it truly is a must see!