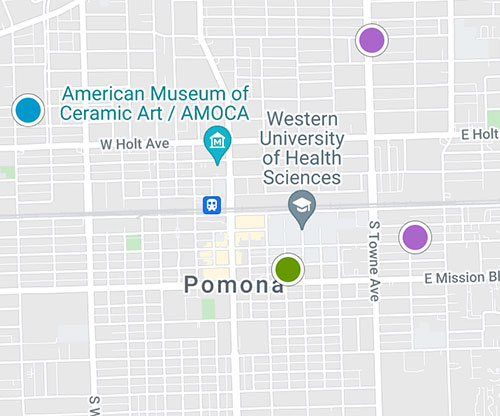 At certain times of year, travelers to Pomona can’t miss the bright shining lights of the ferris wheel, hear the sounds of livestock and smell the aroma of cotton candy for a simple reason: The city has long been the home of the L.A. County Fair.

Located in the Pomona Valley, this city of about 149,000 wasn’t named after the Roman goddess of fruit for no reason. For much of the 19th century, in fact, the city of Pomona’s rich, agricultural fields yielded an enormous bounty–vineyards, raisins, olives and citrus – which established it as a leading supplier of produce in the region. That agricultural legacy has mostly passed, and today Pomona’s economy – as well as its demographics—are much more diverse.

Fully incorporated in 1888, the seventh largest city in L.A. County, Pomona is situated about 27 miles east of Los Angeles, and it sits among several main freeway arteries –among them are the 10, 60, 210 and 57 freeways. The Metrolink commuter rail also runs through Pomona, connecting the city with downtown Los Angeles and Riverside.

Since the 1980s, Pomona has enjoyed rapid growth, developing new neighborhoods like Phillips Ranch along with its older residential ones. Today, the hilly areas between Pomona’s downtown and the city of Diamond Bar have been developed as well, while gentrification is clearly evident in Northern Pomona’s neighborhoods.

Families with small children are served by the Pomona Unified School District and also by Claremont Unified School District. In the more affluent area of Phillips Ranch, Diamond Ranch High School is an option for many students. The city is also within easy reach of a number of public and private universities, including Pomona College, Cal Poly Pomona and Mt. San Antonio College.

The county fair isn’t the only major attraction: The Auto Club Raceway dates to the 1960s and features a quarter-mile dragstrip that has tested many drivers’ mettle, while the Glass House, a music club, brings exciting performances by popular bands to a small, intimate venue.

The city’s historic district includes many Craftsman-style and Victorian-style houses that still stand today. These homes, which in many cases are still private residences, are more than just a picturesque part of the neighborhoods: They’re a reminder of Pomona’s exciting, historic past.

$450,000
2 Beds ⋅ 1 Baths ⋅ TR22177142 MLS ⋅ Active Status
Welcome to 776 W 8th Street which is located in the beautiful City of Pomona California. This property consist of 2 Bedrooms 1 Bathroom 702 SQFT and sits on a 7,104 SQFT lot. As you enter the front gates you will see the large driveway and oversized garage which is perfect for someone who is into working on cars or needs extra storage. The back of the home has an alley axis which is perfect to potentially add an ADU in the feature. As you enter the home you are greeted by a large living room perfect for entertaining guest. The Kitchen is filled with stainless steel appliances and has plenty of cabinet space for storage. This property comes with a security system that sellers will leave for new buyers. Act fast to buy your dream home!

$680,000
3 Beds ⋅ 2 Baths ⋅ TR22176631 MLS ⋅ Active Status
Such a nice home! These opportunities are far and few between! 3 bedrooms and 2 bathrooms, includes a master suite with an attached and permitted bathroom. True pride of ownership with upgrades throughout in the very desirable Westmont neighborhood. Last time on market was almost 30 years ago! Ready for your enjoyment with newer central air and heat, new bathrooms, hardwood flooring, newer dual pane windows, 2 outdoor covered patios, pavered driveway, upgraded electric main panel and water heater, and a modern updated kitchen to name the highlights. Beautiful drought tolerant landscape is water wise and an extra-long driveway that is pavered & will accommodate an rv. Wood fenced front yard with a tiled wood look front porch. The tiled foyer leads to a living and dining room with hardwood floors. The tile floor in the kitchen accents the newer cabinets and tiled counter tops. Gas range and oven, vented hood. Microwave niche and extra storage cabinets. Porcelain sink with a window over it that looks to the back yard. Tiled backsplash and custom lighting. A laundry room is off of the kitchen and includes the washer and dryer. Down the hardwood floored hallway is a full bathroom with pedestal sink and tiled inlay on the floor that features real fossils- a stunning look! All bedrooms have hardwood floors. The master suite has a walk-in closet and a door to access the back yard. What a gorgeous bathroom addition! Spacious walk-in shower with a rain shower head. The hand painted pedestal sink is a work of art! The back yard was designed to relax and entertain in. Brick paver and concrete patio surfaces, sail shades and solid covered patio covers. A storage shed and 2 car detached garage. The forced air furnace is about 3 to 4 years new. There is a brand-new sump pump near the front of the garage to take water to the front sidewalk area during heavy rains. Seller is ready for a quick escrow! Come take a look and fall in love.

$595,000
4 Beds ⋅ 2 Baths ⋅ CV22176487 MLS ⋅ Active Status
A little TLC is all that is needed to turn this spacious 4 bedroom 2 full bath house into the jewel of the neighborhood. It sits on a large corner lot and is surrounded by a white iron fence that provides privacy and security. It has a newer shingle roof, a sprinkler system, a 2 car attached garage with parking space in the driveway for up to 4 cars. As you enter through the front door you will see custom ceramic tiling in the large family room, kitchen, and eating area. The large tiled fireplace in the family room is custom made and is a focal point of the living area. All 4 bedrooms have laminate wood floors and there are shutters in all the bedrooms. The home is near numerous restaurants, shopping areas, schools, freeways, and 2 hospitals. This house will not last long.

$175,000
3 Beds ⋅ 2 Baths ⋅ IV22176428 MLS ⋅ Active Status
BEAUTIFUL MANUFACTURED HOME BY THE 210 FWY, GOOD CONDITION, NEAR BY SHOPPING CENTERS AND THE CLAREMONT VILLAGE FOR ENJOYMENT. ACCESS TO SCHOOLS IN THE CLAREMONT UNIFIED SCHOOL DISTRICT. READY TO SHOW

$637,910
3 Beds ⋅ 2 Baths ⋅ IV22176149 MLS ⋅ Active Status
Completely remodeled 3bdr 2bth home with large pool sized lot. This home is located adjacent to the Claremont Village, La Verne, the Pomona Fairplex and the Claremont Colleges. The previous owner upgraded the plumbing, electrical, and they added a new electrical panel. The exterior of this Craftsman style home features dual pane windows, a stylish front porch with tile flooring, and a modern exterior paint scheme. The interior is open and bright. The great room is replete with natural light, plenty of windows, recessed lighting, wooden beams in the ceiling, modern baseboards throughout, and beautiful vinyl planks in the living areas. The kitchen has been completely remodeled with subway tile from counter top to ceiling, custom counter tops, custom cabinets, custom farm sink, wine cooler, and custom cut out cabinets in the wall above the sink. The primary bedroom has recessed lighting and a closet. The primary bathroom has a walk in tile shower with frameless glass and a door leading to the back yard. The secondary bedrooms have recessed lighting and dual windows. The 2nd bathroom features a tub in the shower with tile walls and frameless glass doors. There is a large attic space for storage. The back yard is your blank canvas to build out an oasis in the back yard, or possibly an ADU. The upgrades and location make this home a must.