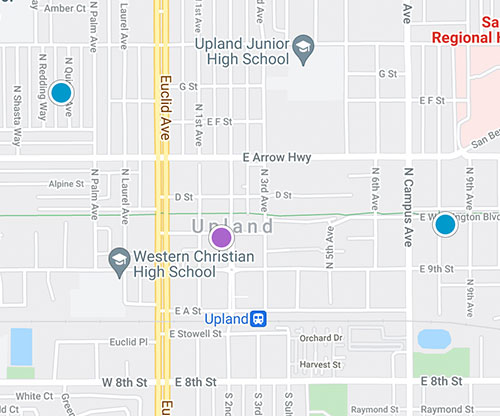 The city of Upland is another foothill community that started its existence as a citrus town – a community first founded to capitalize on the citrus industry thriving all over the San Gabriel Valley starting in the late 19th century. Founded in 1887 and known as North Ontario, the official city of Upland wasn’t incorporated until 1906.

Reminders of its past can be seen in landmarks like the Old Fire Station at 151 D Street, which is currently being refurbished, as well as a concerted effort by the city to use a signage program that identifies the city’s nine historic districts to residents and visitors.  Anyone who chooses Upland for their home will find, the city motto boasts, that they’re living in a place with “more than a century of gracious living.”

Whether it’s the motto or something else, Upland is a popular destination for many people. The city population, according to a 2010 census, was 76,000. That number, however, is already changing and the community is growing: City expectations are that the population will reach 80,000 by 2015. From that same 2010 census, the estimated household income was identified as $80,386.

With the San Gabriel Mountain range to the north, the city has large residential and retail communities and easy access to cities farther east and west (downtown Los Angeles is only about 30 miles west of Upland) thanks to the 210 Foothill and 10 San Bernardino freeways.

Much has been done to foster redevelopment and promote the city’s commercial side while preserving reminders of the past. Take the Santa Fe Depot, for example, which was once a part of the railroad serving travelers between L.A. and San Bernardino in the 1930s (now it is the home of Pacific Wine Merchants).

The city’s downtown provides a quiet, leisurely space for strollers to shop at a variety of antique stores, custom shops and fine restaurants. In the spring and summer, Thursday evenings at the Town Center are the location of a popular, certified Farmer’s Market known as the “Second Avenue Market.”

More than 12,000 children attend schools in the Upland Unified School District (10 elementary, 2 junior high, 2 high school) – many of these are past recipients of recognition as California Distinguished Schools and California Title 1 Achieving Schools.

And, for a less traditional form of achievement by local youths, Upland is also an important part of the early history of skateboarding culture. The city was once the home of the Pipeline Skate Park, opened in 1977, which skateboarders considered one of the “gnarliest” parks around.  Today Upland still has a skate park offering plenty of gnarly action … provided that skateboarders wear the right equipment (helmets and pads) of course! Upland Ca 91784 homes for sale.  Upland Ca 91786.

$620,000
3 Beds ⋅ 2 Baths ⋅ CV22109421 MLS ⋅ Active Status
NOT a flip but a home that has been lovingly cared for and upgraded. So many features. Let’s start with the main house. Beautiful kitchen remodel with top-of-the-line appliances, Thor 6 burner range, 55 bottle wine fridge, GE fridge and dishwasher, Smart Home controls and automation. Dual pane windows, tankless water heater with filtration system, complete re-pipe, recessed dimmable led lighting, in-wall tv wiring, custom mantle and fireplace with custom heat vents, ceiling fans in all bedrooms, custom built-in living room cabinets, upgraded electrical inside and out, top-of-the-line super-deep 8-person spa, and more makes this home a carefree wonderful retreat. There is also a motorized custom-built driveway gate and oversized driveway for multiple cars, RV or boat. Some of the things the sellers love most about this home are cooking in the large kitchen, the open floor plan, sitting on the side patio enjoying a glass of wine, the mature grape vines, evenings in the hot tub listening to music (built-in BlueTooth audio with subwoofer, custom lighting) and spending time around the gas fire-pit with friends. They also love the short walk to downtown for restaurants, shops, bars, Lemon Fest, bike trail and Metrolink. The permitted second garage features a full kitchen, 3/4 bathroom, living space with tile flooring, central heat and AC, dual pane windows and beautiful French doors leading to a private sitting area. It also has it’s own electrical meter which you can monitor with your Smart House controls.

$989,000
4 Beds ⋅ 3 Baths ⋅ CV22107925 MLS ⋅ Active Status
Welcome to your new home in Upland! This turn key 2 story pool & spa home has 4 spacious bedrooms and 3 bathrooms, 2,284 square feet of living space & sits on a 10,033 square foot lot. This home has amazing curb appeal as it boasts a big, beautiful front yard, green grass, mature trees & landscaping, brick planters, concrete walk way leading to the solid oak front door accented with beveled glass, a wide driveway welcoming you to the 3 car attached garage. As you enter into the formal living/dining room, you will be greeted with beauty & elegance graced by the Cathedral ceilings, large windows with Plantation shutters & beautiful vinyl plank water proof flooring. The family room is so awesome for resting or entertaining as it too has the lovely flooring, gas fireplace for those chilly nights, LED recessed lighting, a built in entertainment maple cabinet with granite countertop-ideal for storing your CD's, books etc... It also has a glass slider leading to the backyard. The kitchen is open to the family room making entertaining a breeze!! You will love the kitchen as it delivers beauty & functionality with its luxury plank flooring, bay window & more windows giving you a great view of the backyard. Kitchen was remodeled around 4 years ago with maple wood cabinets & drawers, soft close hardware, island seating for 4, built in desk and cabinets for working from home, recessed lighting, walk in lighted pantry, coffee bar counter space, 5 burner gas stove, stainless steel appliances such as: refrigerator, microwave oven, Whirlpool dishwasher, oven & sink. After a long day at work, relax in the downstairs Master Suite! This Suite is large & luxurious. You will love the mirrored door, lighted, walk in closet, high ceilings, slider to the backyard & pool. The Suite is graced with an Ensuite Master Bathroom that is sure to please with its beautiful water proof plank vinyl flooring, soaker tub, large stand alone shower, dual sinks and vanities & private water closet. The second floor also provides an additional 3 large bedrooms, full bathroom, walk in attic for additional storage. The backyard is spectacular & perfect for entertaining. There is a large "Alumawood" covered patio for keeping cool or you can lounge in the sun! You won't be able to resist diving into the crystal blue pool then relax in the spa while the steaks are sizzling on the BBQ! You will love the huge RV parking, indoor laundry and so much more! Don't miss this opportunity to own this gem!!

$2,295,000
6 Beds ⋅ 6 Baths ⋅ CV22108639 MLS ⋅ Active Status
BOASTING IN LOCATION, QUALITY AND ELEGANT LIVING!! STAGED ON A 20,009 SQ. FT. LOT WITH 6,583 SQ. FT. OF ENTERTAINMENT SPACE!! BE AMAZED BY IT'S IMPRESSIVE FOYER SOARING CEILINGS AND STRIKING STAIRCASE. THIS FLOOR-PLAN GRANDSTANDS A TOTAL OF 6 BEDROOMS 5.5 BATHS!! INCLUDES ENGINEERED HARD-WOOD FLOORING AND CARPETING THROUGHOUT!! TWO MASTER SUITES; ONE UPSTAIRS AND ONE DOWNSTAIRS, EXECUTIVE OFFICE AND A MASSIVE GAME ROOM W/FIREPLACE; FANTASTIC FOR ENTERTAINING!! 1ST FLOOR: A SIZABLE FORMAL DINING AND LIVING ROOM AREA; WARM AND INVITING; CENTERED BY A WOOD-BURNING FIREPLACE AND BUILT-IN SHELVES. NICE SIZE KITCHEN WITH CENTER ISLAND DESIGNED IN WARM TONES OF GRANITE, BEAUTIFUL UPPER AND LOWER CABINETS, HIGH-END APPLIANCES, SUB-ZERO REFRIGERATOR AND BREAKFAST AREA!! RETREAT IN THE LUXURIOUS FAMILY ROOM W/FIREPLACE!! BE IMPRESSED BY THE OVERSIZED MASTER-SUITE AND FOR ITS LAVISH DESIGNED MASTER BATH; MASTERFULLY DONE IN QUALITY CABINETS AND RICH WARM TONES!! AN EXECUTIVE OFFICE WITH ALL THE BELLS AND WHISTLES; PERFECT FOR YOUR HOME OFFICE!! PLUS 3 LARGE BEDROOMS AND NICE SIZED BATHROOMS! 2ND FLOOR: A MASSIVE DOUBLE DOOR ENTRY GAME ROOM; PLUS A GYM GREAT FOR EXERCISING!! A MASSIVE SIZE MASTER SUITE; FRENCH DOORS THAT LEADS YOU OUT TO YOUR VERY OWN PRIVATE BALCONY WHERE INCREDIBLE VIEWS CAN BE SEEN! PLUS A GORGEOUS FIREPLACE, HIGH-CEILINGS, A HUMONGOUS WALK-IN CLOSET W/ CUSTOM BUILT STORAGE. PLUS A DOUBLE DOOR ENTRY TO YOUR MASTER BATH; DUAL SINKS, LARGE TUB AND A GREAT AMOUNTS OF CABINETRY; IDEAL FOR TOWELS, TOILETRIES AND SO MUCH MORE!! YOU'LL ALSO FIND ANOTHER CONSIDERABLE SIZED BEDROOM AND BATH!! OUTDOOR LIVING: A PARADISE IS FOUND IN THE PICTURESQUE BACKYARD; SURROUNDED BY LUSH GREENERY, MATURED TREES AND AN ARRAY OF FLOWERS FOR A TOUCH OF COLOR, COVERED PATIO PERFECT FOR ENTERTAINING, SPARKLING SWIMMING POOL AND SPA!! THIS IS A DREAMSCAPE FOR ALL YOUR GUESTS TO ENJOY!! GREAT SPACE ON EITHER SIDES OF THE HOME; PERFECT FOR AN ADDITIONAL SEATING AREA!! 2 CAR GARAGE W/ A LONG DRIVEWAY FOR ADDITIONAL PARKING! THIS IS A SHOW STOPPING, STANDING OVATION, ONE OF A KIND...DREAM HOME!!

$1,295,000
4 Beds ⋅ 3 Baths ⋅ CV22108633 MLS ⋅ Active Status
OUTSTANDING LOCATION!!! THIS EXQUISITE REMODELED ONE-STORY RESIDENCE FEATURES A POOL/SPA 4 BEDROOMS AND 2-1/2 BATHS; SETTLED ON A LOT SIZE TOTALLING 15,120 SQ. FT.. ARCHITECTED BY NICK GULA; A TOP-NOTCH CUSTOM BUILDER ADMIRED FAMOUSLY FOR HIS BOLD COLLECTION OF MAINLY SINGLE-FAMILY HOMES DESIGNED IN A VARIETY OF UNIQUE ARCHITECTURAL STYLES. BENEFIT: MAKING IT A ONE OF A KIND!! AN INVITING CURB APPEAL WITH AN EXEMPLARY ENTRY: WELCOMED BY LUSH GREENERY, MATURED PALM TREES, PLENTIFUL OF FOLIAGE LASTLY GREETED BY ELEGANT DOUBLE DOORS WITH INLAID GLASS!! SHOWING OFF A GENEROUS OPEN FLOOR-PLAN THAT FLAUNTS A NUMBER OF SLEEK FINISHES. INTERIOR WALLS FASHIONED IN WARM TONES YET KEEPING IT BRIGHT AND STYLISH!! REMODELED WITH TODAY'S POPULAR HOME DESIGN; PAINTED CEILING BEAMS!! PERFECT FOR BOTH RUSTIC AND A MODERN TWIST, RICH ENGRAVED WOOD FLOORING, RECESS LIGHTING, HIGH CEILINGS, PLENTY OF WINDOWS FOR NATURAL LIGHTING, PLUS SOFT DOORWAYS DESIGNED IN SEGMENTED ARCHES; MAKES FOR A GOOD FLOW FROM ONE LIVING AREA TO ANOTHER, ALLOWING EACH ENTERTAINING AREA TO STAND ON ITS OWN!! WITH THIS STYLE OF LAYOUT MAKES LIVING, DINING AND FAMILY ROOM IDEAL FOR ENTERTAINING; ESPECIALLY THE FAMILY ROOM WHERE YOU'LL FIND A WET BAR AND AN EYE STRIKING STONE FIREPLACE!! RENEWED KITCHEN; COUNTERTOPS FINISHED IN A MESMERIZING PATTERN OF GRANITE, GORGEOUS UPPER AND LOWER CABINETS W/ UPGRADED FIXTURES AND A GRAND CENTER ISLAND THAT SEATS OVER 6 GUESTS, PLUS IT INCLUDES AN ARRANGEMENT OF HIGH-END STAINLESS STEEL APPLIANCES AND A RECESSED REFRIGERATOR. DOUBLE DOOR MASTER SUITE AND LUXURY BATH; MIRRORED CLOSET DOORS, DOUBLE SINKS, WALK IN SHOWER, AND WALK IN CLOSET. ALL BEDROOMS GREAT IN SIZE; MAKE ONE AS YOUR OFFICE! PLANTATION SHUTTERS, WIDE HALLWAYS, AND SO MUCH MORE OFFERED!! GUEST BATH NICELY DESIGNED WITH UPDATED VANITY AND FIXTURES PLUS A LAUNDRY ROOM W/SINK. DREAMSCAPE BACKYARD: STUNNING MOUNTAIN VIEWS, SPARKLING SWIMMING POOL & SPA, OUTDOOR LIGHTING, PUTTING GREEN AND COVERED PATIO W/SKYLIGHTS. DEEP DRIVEWAY FOR AMPLE PARKING PLUS A 3 CAR GARAGE!! THIS LEADING HOME REPRESENTS THE BEST OF IT'S KIND; GRAB IT AND MAKE IT YOURS TO OWN!!!