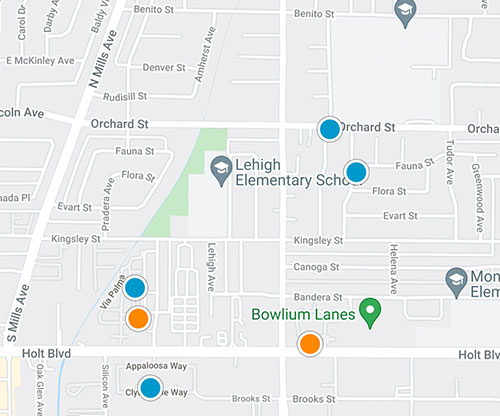 The city of Montclair in San Bernardino County might derive its name from the fact that the beautiful San Gabriel Mountain range is located to its north; but, the fact is, the city could have a name that celebrates it as a bridge or threshold between the Inland Empire and the greater Los Angeles metropolitan area.

With a population of almost 37,000 residents, the city sits between Pomona to the west, Ontario to the east and Claremont to the north while a major freeway, the 10 San Bernardino, passes through the city's northern section. This advantageous location is a mark of pride for the city's Chamber of Commerce, which points out that Montclair is conveniently within reach of many entertainment, dining, educational and professional destinations around the Los Angeles area.

According to a survey three years ago, the estimated median household income in Montclair was about $52,000 while the estimated home or condo value of about $254,000 fell below the state average  (the California average was $384,000).

The city is also conveniently located close to many other private and public colleges and universities in surrounding cities; and a major source of commerce and business in the city is provided by the Montclair Plaza, a popular shopping spot that first opened its doors in 1968. Montclair Ca 91763 homes for sale.

$749,999
3 Beds ⋅ 3 Baths ⋅ DW22111234 MLS ⋅ Active Status
Beautifully updated single story home with gorgeous mature trees creating great curb appeal and shade. This home was recently renovated and features 2 master bedrooms. The home is spacious and has a great layout perfect for a large family and or entertaining. The home also boasts a living room and family room. The property is close to everything you may need from shopping, entertainment and transit. This beauty is ready for its new owners to call it home and priced to sell. Thank you for showing and see you in escrow.

$4,500,000
22160265 MLS ⋅ Active Status
We are pleased to present a One-Of-A-Kind Investment Opportunity in a prime Montclair neighborhood. This listing features TWELVE Spacious 2 Bedroom + 1 Bathroom Units (Approximately 837 Square Feet Each). The property consists of SIX Single-Story Detached Duplexes on a Large 30,800 Square Foot Lot, just a couple blocks from the Montclair Town Center. Property has been Meticulously Maintained under the same ownership for Over 35 Years! There are minimal landlord expenses as units are separately metered for Gas and Electricity. All units have central A/C, Dual Pane/Low-E Glass Windows, Garage Parking, Private Patios and Laundry Hook-Ups. Property has Strong In-Place Rents with Realistic Rental Upside of +/- 26%. ALL Six Duplexes are separately parceled allowing a Buyer to utilize Residential 30 Year Fixed Financing. Many Recent Capital Improvements include Copper Plumbing - Horizontal & Vertical, and a New Roof in 2016. Tenants can appreciate being within a short commute to Downtown Montclair and the major freeways such as 10, 71 and 60. This is a Great Asset located in a Limited Inventory Market.

$3,700,000
WS22090148 MLS ⋅ Active Status
Medical building with 8 units, has renovated in 2021, fully leased. Next door to the Montclair Hospital and close to shopping and highway. It has a very stable income and is a great investment opportunity! Drive by only, please do not disturb tenants.

$699,000
3 Beds ⋅ 3 Baths ⋅ CV22107732 MLS ⋅ Active Status
This single family home is located in the desirable city of Montclair, just minutes from The Montclair plaza, Montclair High School, Restaurants, and the 10 freeway. Upon entrance to the home, you will notice the carpet flooring, bright and open floor plan, tile fireplace in the family room, and half bath. Entering the kitchen you'll be met with tile flooring, clean tile countertops, stainless steel sink, and wooden cabinetry. Going upstairs you’ll find the master bedroom along with 2 other bedrooms that offer great space. The backyard features a wooden patio, plentiful space for entertaining, and includes a lemon tree!! Don't miss out on the opportunity to own a home in this desirable area!! MORE PICS COMING SOON!!