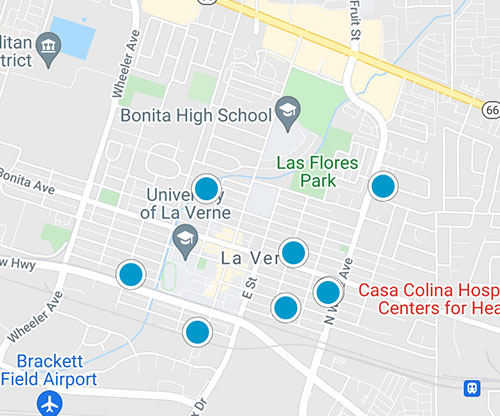 La Verne is a small city in the foothills of the San Gabriel mountains that is often described as a close-knit community, a place that, like its neighbor to the east, Claremont, also takes some of its mood and character from the educational institution at its center, the University of La Verne.

With about 31,000 residents, La Verne has a diverse population, ranging from young families and school-age children to senior citizens. The city has a small municipal airfiled, Brackett Airport, and is about a 30-minute drive from downtown Los Angeles.

Students are served by several private schools at the secondary level – including Damien High School and Lutheran High School –as well as by Bonita High School (which is part of the Bonita Unified School District).

A visitor to the La Verne area in the late 19th century would certainly have found a different town at the time – then it was called “Lordsburg,” named for landowner Isaac Wilson Lord who jockeyed with the Santa Fe Railroad to entice newcomers to come to Southern California and live in his little village. At the time of its founding, in 1891, the University of La Verne was then known as Lordsburg College.

The current city, incorporated in 1906, took its name from French words suggesting a verdant landscape and a springlike quality – and, like other communities along these foothills, the city was planted with orchards of grapefruit, orange, lemon and other citrus that contributed to a booming local citrus industry in the late 19th and early 20th centuries.

Today the city accommodates both residences and businesses, with city planning devoted to a careful consideration of the way retail and commercial activity meshes with the small-town atmosphere and college campus flavor of the city.

$688,000
2 Beds ⋅ 1 Baths ⋅ CV22174475 MLS ⋅ Active Status
CHARMING MID-CENTURY BUNGALOW WITH UPDATES ON LARGE LOT. Experience the charm of La Verne near the downtown Village and University of La Verne! This quaint mid-century bungalow offers charm and character with touches of modern updates. Enjoy central AC and heat, wood floors, mostly copper plumbing and recessed lights. The home greets you with a white picket fence with a winding walkway to the covered front porch and large front yard. Watch your friends, family, pets etc., enjoy the expansive front yard while admiring the mountain views. Once inside, the large living room offers an abundance of natural light from the multiple double pane windows. Wood floors run throughout a majority of the home, including the living room, hallway, and both bedrooms. The primary bedroom offers a large walk-in closet that provides plenty of storage. The efficiently designed kitchen offers views to the backyard, good counter top space to work, and a eat in breakfast nook that receives wonderful morning sun. The second bedroom is located towards the rear of the home and also features a dual pane window. The bathroom is generously sized and offers a tub and shower, plus pedestal sink and storage for linens and towels. Side by side indoor laundry is a huge plus! Backyard offers a detached structure that could be turned into an office, work out area, and play shed. Large covered patio is perfect for those warm summer days. Mostly copper plumbing, as well! Perfect starter home, or for those looking to move from a condo or town home. Well suited for someone looking to enjoy easy living in the beautiful town of La Verne!