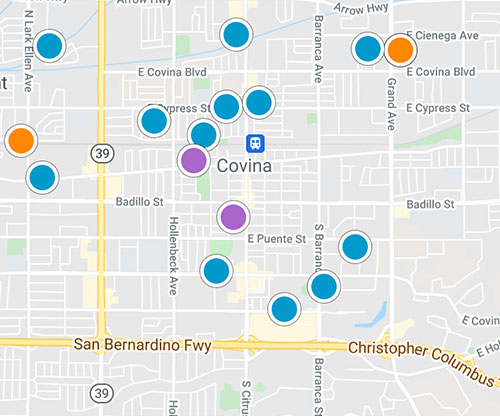 The city mixes commercial and residential areas, and you can find a blend of old and new—apartment buildings alongside older Craftsman-style homes with large front porches—on many of the streets, like Badillo Avenue where it runs past the centrally-located Covina Park (near Intercommunity Hospital).

Even though its name derives from putting “cove” and “vine” together, vineyards didn’t make Covina a booming town in the early 1900s. By 1909, in fact, Covina had become the third largest producer of oranges—not wine or grapes—in the world.

The broad, flat stretches of land in the city were an ideal soil for growing citrus crops, and, as late as the 1950s, the city still claimed to be producing the world’s best oranges.

Though no freeways pass through the city, Covina is opportunely located near several freeways which are easily accessed: the 10 San Bernardino, 210 Foothill, 605 San Gabriel River Freeway and 57 Orange Freeway. The city also belongs to the Metrolink Commuter system, with a train stop located on Citrus Avenue just north of the city’s downtown.

The flagship of the city’s downtown, where you’ll find a cluster of shops and restaurants on Citrus Avenue, is the Covina Center for the Performing Arts. This majestic venue recently received a multimillion dollar remodeling job and features an ongoing schedule of theatrical events.

For those more inclined to celluloid instead of live theatrical performances, the city also has one of the largest movie multiplexes in the county, the AMC 30, located on Azusa Avenue where it intersects with Arrow Highway.

Covina is a city of constant change, and another example of that is the recent remodel to Heritage Plaza Park, at the corner of Citrus Avenue and San Bernardino Road. Today visitors to the park will find that it has been renovated to create a town square-style open space for all kinds of community events. In the midst of a busy Los Angeles metropolis, then, Covina strives to preserve something of its small-town heritage.  Covina Ca 91722 homes for sale.  Covina Ca 91723 homes for sale.

$599,900
3 Beds ⋅ 3 Baths ⋅ OC22252731 MLS ⋅ Active Status
Now Selling The Covina Bowl Collection. Inspired by the namesake of the land it is built on. It is a neighborhood that will boast the best in mid-century inspired design. Come home to 736 square feet of meticulous design and comfort. A spacious, light-filled great room leads to a bright, open dining area and kitchen, the ideal setup for entertaining. A chic powder room for guests, plus a useful storage area, round out the first floor. Upstairs, a generously sized primary bedroom and adjoining bath await – the perfect (and very private) sanctuary to soak in some serious R&R.

$850,000
3 Beds ⋅ 2 Baths ⋅ PF22250024 MLS ⋅ Active Status
Stunning and completely remodeled corner lot home on a very quiet street ready for your immediate move-in. This lovely and spacious 3 bed/2bath home boasts the following full upgrades: flooring throughout, recessed lighting, paint inside and outside, remodeled kitchen and bathrooms, copper plumbing, 200 amp electrical panel and interior wire, double pane windows, front and back doors, roof, insulation in the attic, HVAC system, tankless water heater, finished garage with new door, garage door opener, fully drywalled, finished floor, and pull down ladder for massive storage, landscaping and much more. You may never want to leave, but if you do, this home is close to everything Covina and surrounding areas have to offer. 0.3 miles from Hollenbeck Park, 0.4 from Covina Town Square, 1.5 from Clearman's North Woods Inn, 1.2 mils from Gladstone High School, and so close to all the trendy shops and restaurants Covina and surrounding areas have to offer.

$1,400,000
5 Beds ⋅ 4 Baths ⋅ 22223527 MLS ⋅ Active Status
The seller is motivated here so send all of your offers. All offers will be considered. This beautiful property is located on a charming street with finely manicured landscaping. The gated community is guarded by a 24 hour guard at the entrance who checks all visitors into the community. Luxurious curb appeal will greet you as you pull up to the property. The house is grand and in great ready to move in condition. It is a prime property to entertain your family and friends.

$826,300
3 Beds ⋅ 2 Baths ⋅ IG22251914 MLS ⋅ Active Status
This is a truly lovely built home as well as being functional in the city of Covina , it has 3 bedrooms and two bathrooms , an attached garage for 2 cars , a formal dinning room , and a separate living room , a large family room with high ceilings with a fireplace , Kitchen has been upgraded, this comes with a large lot and plenty of parking. It is close to parks , schools and shopping , don't let this one get away.Bring your offer.