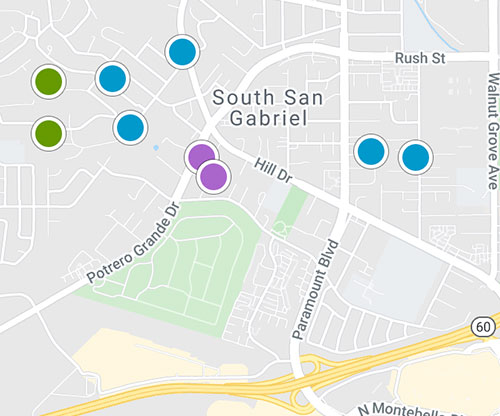 19th century pioneers heading westward helped to influence the character and identity of the city of Rosemead, which is part of a cluster of cities, including Arcadia, Temple City, San Marino, and San Gabriel, in the west San Gabriel Valley.

It was one of these settlers, in fact, a man named Leonard Rose, who set up a 600-acre ranch in the 1850s that inspired the city’s name. Breeding and training horses in the dry, peaceful community, Rose called his ranch “Rose’s Meadow”—and the change to the shorter “Rosemead” was not far away.

There are still signs of a quaint, rustic town in this community of about 54,000, but Rosemead has also been a place of dramatic demographic change.  Much of it started in the 1990s with an influx of Chinese and Vietnamese immigrants who moved to Rosemead and set up businesses there.

Drivers on one of the city’s largest streets, Rosemead Boulevard, may not realize that they are experiencing some automotive history. Along with Route 66, Historic State Route 19 is a lesser-known cousin of that famed highway that connects twelve suburban cities in Los Angeles County. It begins in the south, with Long Beach, and runs north with Pasadena, Arcadia and the city of Rosemead as some of its northern endpoints.

Two school districts—Garvey School District and Rosemead School District—serve students in the city, and a number of important companies are headquartered in Rosemead, including electrical services company Edison International and the Panda Restaurant Group.

$1,850,000
P1-10846 MLS ⋅ Active Status
Rare opportunity to acquire a multi-family property consisting of 2 duplexes on a 11,365 SF lot (per Assessor). This property includes 1525-1537 Potrero Grande. Duplex #1 (1525-1527) includes two 2 bed/1 bath units and Duplex #2 (1535-1537) includes two 2 bed/1 bath units. Both duplexes must be sold together. Each unit has laundry in the unit, a 1-car garage, and are separately metered for electricity & gas. One of the units will be delivered vacant and the other 3 are occupied by long-term tenants. These units are certain to be in demand, and provide the savvy investor with upside potential. Trust Sale with no Court Confirmation needed. Located between Garvey Ranch Park and Whittier Narrows Park, and close to shopping, this unique opportunity will not last long!

$1,599,900
8 Beds ⋅ 8 Baths ⋅ CV22174147 MLS ⋅ Active Status
Location! Location! A great opportunity to own two separate recently renovated freshly painted single family homes in the City of Rosemead. Each gorgeous home offers 4 bedrooms, 4 bathrooms, one suite on each floor and an open loft upstairs. The open and airy living room welcomes you with lots of natural lights. Adjacent is the cozy dining area. The upgraded kitchen features granite counter tops and plenty of cabinet space. Modern water proof flooring throughout. 4 carport and 2 uncovered parking spaces. This property can be your perfect home or your next investment opportunity. Very good location, short walking distance to shopping centers with supermarkets, Starbucks, Subway, Baskin Robins, other restaurants, bakeries, Walgreens, CVS, Fish market on corner of Garvey and Kelburn. Convenient access to 60 & 10 Freeways and much more. This is a must see to appreciate! Square footage not taped, buyer to verify.

$818,000
3 Beds ⋅ 2 Baths ⋅ WS22175622 MLS ⋅ Active Status
This home is located in a very convenient area of Rosemead, schools, public transportation, markets near by. Opportunity to first time buyer, or investor. This will not last.

$788,000
3 Beds ⋅ 2 Baths ⋅ AR22175093 MLS ⋅ Active Status
Come to see this serenity and private lovely home located in the desirable area of North Rosemead. With almost 1,300sf of Living Area and almost 6,000sf spacious Lot Size, original permitted for 2 Bedrooms, 2 Baths, plus an Office/Dent which can be the 3rd Bedrooms and 2-car Garage. This charming tree-line Street Home has it all and is awaiting for you to call Home. Consists of Formal Living Room, Dining Room, and Open kitchen. This Open Floor-plan Home invites your guests for evening and weekend Entertainments. The Front and Backyard’s Landscaping was nicely maintained with so you can enjoy your Summer year round. Conveniently located with Walking distance to Schools, Shopping Malls, Restaurants, Banks, etc. Must see to appreciate!