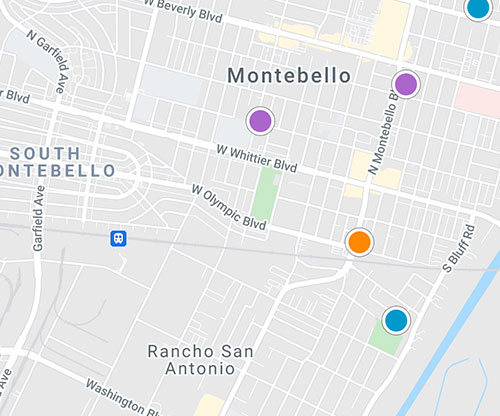 Montebello is a member of the Gateway Cities, the association of 27 cities in southeastern Los Angeles County that embrace a variety of industries and lifestyles in the greater metropolis area.

But Montebello, with a population of about 63,000, also proudly clings to its roots as a quaint agricultural town, blooming in the early years of the 20th century.

The city first took shape, in 1899, when it was carved out of rancho lands held by several businessmen and investors. It was either the views of the majestic San Gabriel range or the rolling green hills of the community that may have contributed to the decision to name the city Montebello, which is Spanish for “beautiful mountain.”

Montebello was renowned as an agricultural center, especially because of its production of flowers and berries as well as fruits and vegetables.

As of 2011, the U.S. census reported that the city’ largest group was Latino -- which isn’t surprising since its neighbor to the west is another bastion of Latino population, East Los Angeles. Many other groups, however, call Montebello their home. A visitor driving past the city’s Bicknell Park, for instance, will notice a tall, gray, belltower-like structure built as a memorial to Armenian genocide: This is because the city also has a significant Armenian-American community.

The city’s families are served by a multitude of schools provided by the Montebello Unified School District, as well as several private parochial schools and the Applied Technology Center, a $30 million vocational high school that train students in cutting-edge technical fields.

The community has sought to preserve its greenspaces, and visitors will find a number of parks around the city, especially those connected to its history and to specific citizens. The Sanchez Adobe Park, for example,  is home to the Juan Matias Sanchez Adobe, the oldest standing structure in the City of Montebello, built in 1845; while Reggie Rodriquez Park is an 11-acre park named in honor of a Montebello resident who was a Vietnam War hero.

With about 20,000 trees lifting their branches in neighborhoods across the city, Montebello has also been a continuous recipient of the “Tree City U.S.A.” award since 1991. No doubt, if the city’s founding citizens were alive today, they’d be proud.

$1,045,000
5 Beds ⋅ 3 Baths ⋅ CV22174684 MLS ⋅ Active Status
Come check this!! This home is TURNKEY and gorgeous inside and out. Looking for a big plus? This home is located on a cul-de-sac! Are you needing that one bed and bathroom downstairs? Look no further, this home has IT. Spacious floor plan with ample room for entertaining this holiday season or warming you and your guest with that beautiful floor to ceiling brick fireplace. Gather around in the Eat in Kitchen, lots of natural lighting throughout and direct access from the 3-car garage. Not to be forgotten, the wrap around balcony for those warm summer/autumn evenings enjoying your surroundings while enjoying your beverage of choice. Not ready for autumn yet? How about enjoying this fantastic, oversized pool and spa? A MUST SEE!!! Easy access to nearby shopping, 60 freeway, and schools! Professional pictures coming soon.

$1,099,888
4 Beds ⋅ 2 Baths ⋅ WS22111790 MLS ⋅ Active Status
NEW !Remodeled! 4 bedrooms and 2 baths . Seller will put new windows' screens at close of escrow. Seller will not provide 2 patio screen doors. Seller will not provide termite report or clearance. Seller will not provide stove or dishwasher. Property to be sold "AS IS" with all FAULTS in its present condition without any warranty "IMPLIED" or "EXPRESSED" given by seller. Buyer to verify and satisfy all room counts, square footage and all permits with the city . Buyer agrees to release seller from all legal and financial liabilities in connection with the sale of the house. House is in its tip top condition in the most desirable "BRIGHTON HILLS" area of Montebello. 820 Gardner Dr closed escow @ $1,065,000, (1533 sqft). 2013 Merle Dr closed escrow @ $990,000 (1644 sqft).

$999,900
4 Beds ⋅ 3 Baths ⋅ AR22169537 MLS ⋅ Active Status
Recently renovated single-family house located at the end of a quiet Cal-du-sac. This 2137SQFT house was built in 1968, with 4 bedrooms and 3 bathrooms. New A/C, New paint, new windows, new floor, and new dishwasher. The roof is 7 years old, and the cooper water pipe is approximately 5 years old. The main floor bathroom can access the swimming pool. A patio with stairs gives you a fantastic view plus awesome fireworks on July 4th.