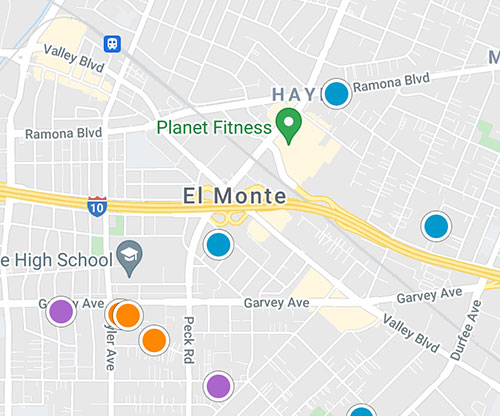 The city of El Monte has many personalities—residential community, industrial area, commercial city.

Its location, situated between the San Gabriel and Rio Hondo rivers, was appealing as a rest stop for 19th century travelers headed to the gold fields of Northern California. It was an idyllic, tranquil spot that took its name from an old Spanish word for “meadow.”

The city also developed an early reputation as a rough-and-tumble frontier town with colorful stories about bandit gangs and gambling saloons.

El Monte has always been an important destination, either for goldseekers heading north or to pioneers coming West on the famed Santa Fe Trail. For many years, until the 1930s, El Monte was a popular place for white settlers leaving behind the Dust Bowl areas of the country. Today the city has a mostly Latino population of about 121,000, and the median household income is about $43,000. The estimated median value for homes or condos is about $350,000.

Thanks to the city’s early success with agriculture, a hub of the Southern Pacific Railroad was built in town, and today the city continues to be a point of commerce and activity thanks to its accessibility to the 605 and 10 freeways.

$739,000
3 Beds ⋅ 2 Baths ⋅ CV22110860 MLS ⋅ Active Status
Location! Location! Welcome to this a lovely home located in El Monte, Close by Shopping Centers, a short trip to access the Los Angeles Freeway systems. This home offers a Spacious Front & Backyards , 3 bedrooms , 2 bath, and 2 car garage , the 2 bedrooms to the right has be completely remodel (new floors , walls ) New pluming and electricity for the whole house .. New central air and heating , the entire kitchen has been remodel. solar panels have recently beed install , buyers to assume the loan for the panels $82 a month , and the pending balance is $25K is a purchased not a lease .

$599,000
3 Beds ⋅ 3 Baths ⋅ BB22095030 MLS ⋅ Active Status
Make new memories in this beautiful El Monte Townhome! This is a 3-bedroom and 2.5-bathroom unit with 1,573-SqFt of living space, plus a private 2-car garage! Washer and Dryer hook up in the garage. As you make your way into the unit, you are greeted with a formal living room that has a high ceiling, a fireplace and a private patio. Take a few steps from the living room and enter the dining area and the kitchen. The kitchen has stainless steel appliances, wooden cabinets and granite countertops. The kitchen also includes a private balcony. Other features include laminate flooring, a wet bar with a granite countertop, central AC, half guest bathroom plus plenty storage space. All 3 bedrooms are on the top floor with great natural lights. The master bedroom has a large walk-in closet and an ensuite private bathroom. This is a controlled accessed building that has a large community swimming pool and club house. Located near Zamora Park, schools, bus stops, Northgate Market, popular dining options and Target. Conveniently easy quick to the 10 and 605 Freeways. Property is well managed by HOA property management, monthly HOA fee covers water, sewer, and trash.