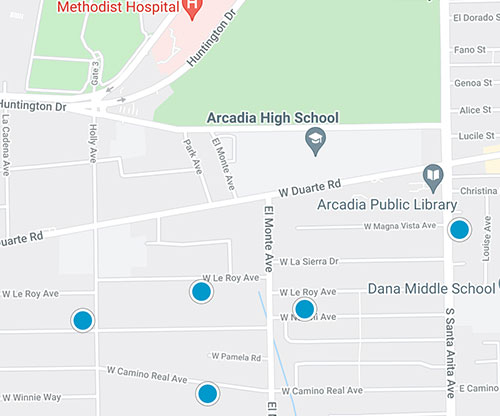 If you ‘ve ever watched the 2003 motion picture “Seabiscuit,” the story of a champion American racehorse, then you caught a brief glimpse of the city of Arcadia.

Arcadia, another in the “foothill chain” of cities along the San Gabriels, is home to Santa Anita Park, the horse racetrack where Seabiscuit picked up many of his victories in the 1930s. The “sport of kings” is a proud part of the heritage of this city located just 13 miles from downtown Los Angeles along the 210 Foothill Freeway.

The city has many other reasons to be proud: In 2010, Arcadia was picked for the list of “Best Places to Raise Your Kids” by Bloomberg Businessweek. The city is also known for the Los Angeles County Arboretum and Botanic Garden.

With so much lush greenery around, then, the picturesque name “Arcadia” was well-chosen by the founders of the city, which was incorporated in 1903.

Part of that founding is thanks to the notorious real estate speculator Elias “Lucky” Baldwin, who acquired the property of a Mexican rancho that would eventually become modern Arcadia. Baldwin envisioned the city as a resort town for visitors (part of his original site was jointly bought by Los Angeles and California to create the arboretum), and today the city is a destination for many seeking an idyllic suburb lifestyle with a gorgeous view of the Gabrielino mountain range.

This city of 53,000 also enjoys a thriving Asian population, as well as a robust retail shopping industry: its centerpiece is the Westfield Santa Anita mall (adjacent to the racetrack). Along with access to the 210 Freeway, a planned extension of the Metro Gold Line light rail will give Arcadia residents more commuting options when a station stop is opened in 2014. "Lucky" Baldwin would surely be proud.

$975,000
2 Beds ⋅ 1 Baths ⋅ AR22111009 MLS ⋅ Active Status
This traditional South-facing home with mountain views is conveniently located on a peaceful treelined street in the desirable North Arcadia neighborhood. It features 2 bedrooms 1 bathroom, living room, dining room, a brick fireplace in the family room and a second brick fireplace in the expansive backyard, a separate laundry area, and 2 car attached garage. You will notice original beautiful hardwood floors throughout the recently remodeled house and a great-sized kitchen with a breakfast nook area that has plenty of natural light. The private backyard offers a beautifully landscaped area and plenty of space for playing, relaxing and entertaining. Plenty of room to add on for a growing family. Situated in the prestigious Arcadia School district, it is minutes away from Highland Oaks Elementary and Foothills Middle School. Conveniently located near Westfield shopping mall, Santa Anita Racetrack, Arcadia golf course, parks, gold line, and all major public transportation. Come to see this delightful home and make it yours! This is a rare opportunity to own in this great neighborhood!

$1,688,000
4 Beds ⋅ 3 Baths ⋅ AR22111405 MLS ⋅ Active Status
Welcome to this cheerful, 2,655± sq. ft. single-story, ranch-style home located in the highly desirable Lower Rancho area in the city of Arcadia. A large formal living room offers a classic brick fireplace along with a beautiful solid wood mantle; the extra-large window brings you views of the mature Elm tree in the front yard and the mountains. The kitchen has a bright breakfast nook with a view of the San Gabriel mountains as well as the expansive front lawn. There is also a separate laundry room and an adjacent pantry closet. The spacious family room sits between the bedroom wing and the additional suite which is perfect for guests. A vaulted ceiling, additional fireplace, and lots of natural light. There’s a door leading to the rear where a low maintenance backyard with a sparkling pool and patio area awaits. Excellent for easy entertaining or dining al fresco. The primary suite comes with a remodeled bathroom and a French door opening up to the backyard. Hardwood flooring throughout the formal living room, dining room and the three-bedroom wing. With a total of four bedrooms (two ensuites), three bathrooms, and an attached garage with additional parking on driveway, this home sits on over 11,000± sq. ft. lot in the award-winning Arcadia School District. The meandering ivy creates a natural fence around the northeast lawn, leaving spacious flat greens perfect for entertaining or spending a relaxing afternoon playing outdoors. There in the front yard sits a sweet grapefruit tree bearing abundant fruits that are highly sought after by friends and neighbors year after year. Close to the Westfield Mall, Santa Anita Racetrack, hospital, parks, entertainment, shopping, restaurants, markets and freeways. Come enjoy this exceptional California ranch-style living in the heart of Arcadia.

$1,150,000
3 Beds ⋅ 2 Baths ⋅ PW22110289 MLS ⋅ Active Status
Have you been looking for the perfect development opportunity but have not been able to find "the one"? This property and home might be the perfect opportunity for you! Located in such a wonderful neighborhood of Arcadia full of life, community, and great neighbors. This property is located in the well sought after and highly awarded Arcadia Unified District with redevelopment taking place throughout the community. This home has been owned by the same family for 57 years so to say that opportunities like this don't come around too often, is an understatement. This home currently offers 1,457 square feet of living space, an attached two car garage, and a large 7,859 square foot lot with a circular driveway perfect for future planning. Hardwood floors, central air conditioning and heat, and mature front yard and back yard trees all contribute to the charm of this home. Located near wonderful parks, great schools, freeway access, shopping, and great entertainment options, this home is ideal for the next new homeowner to establish their roots. With so many creative options for this property, this incredible opportunity, with endless possibilities, will not last long.

$5,549,000
4 Beds ⋅ 5 Baths ⋅ OC22101560 MLS ⋅ Active Status
Want to enjoy the beautiful timberline streets of Arcadia all year round? There is a single-story, north-facing house that looks like it's in the most unique garden in the world. Before approaching the house, you can see a large area of flowers, as if you are in nature. The front yard is really very vast. Once inside, follow the entrance to the living room with the fireplace. The Livingroom has very large glass windows with views of the front yard. Enjoy the precious nature while dining. The upgraded kitchen features wood cabinets, granite countertops and stainless steel appliances. Huge master suite with its own living area and walk-in closet. The huge windows give you unobstructed views of the natural landscape outside. Very spacious and bright, just as the other 3 bedrooms. I would like to use the word endless to describe its huge backyard with a huge swimming pool, pool house, fish pond and a large patio area. A corner of the pool room is a simple dining area, and a large single screen can be hung on the opposite wall to make a private cinema. At night, watching a movie while eating hygienic food at home. The air is fresh, the birds and flowers are fragrant. This house really seems like an elf walking out of nature.