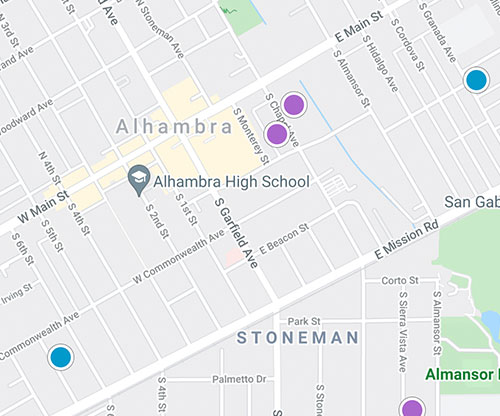 You could say that the “h” in Alhambra stands for an important word close to the community’s heart: “history.”

Located in the western end of the San Gabriel Valley, this city with a population of 83,000 is steeped in history. Many of its homes, in fact, have important historical significance: Drive down any of the city streets and you’re likely to spot residences built years ago in popular styles, including Craftsman and bungalow, Arts & Crafts, Italian Beaux-Arts as well as Spanish colonial and Mediterranean designs.

You’ll find many of these styles in a variety of historic neighborhoods around the city, including Emery Park and several tracts: the Bean Tract (named after early Alhambran Jacob Bean), the Midwick Tract (the location of a former country club) and the Airport Tract named after its former designation as a landing area for Alhambra Airport.

The city has been a destination and home for many celebrities as well, including Judy Garland (who’s said to have performed at the city’s historic vaudeville venue, the Garfield Theatre) and, more infamously, music producer Phil Spector who lived on the estate known as the Pyrenees Castle, which was built in 1926.

Today, the community is home to a large Asian community, which amounts to about half of the population, and a 2010 census gives the estimated median household income as about $51,000.

Two freeways—the San Bernardino Interstate 10 and the Long Beach 710 Freeway—run through parts of the city, and Alhambra is also considering an option to build light-rail transportation that would connect to the Metrolink commuter system.

History, you see, can be found wherever you look in Alhambra.

$1,249,000
4 Beds ⋅ 3 Baths ⋅ PW22111445 MLS ⋅ Active Status
Move in ready home in the highly desirable mayfair tract of Alhambra. This remodeled property consist of a front house that is 3 Bedrooms and 2 Bathrooms comes equipped with dual pane windows and central AC/Heat, A huge primary bedroom with a walk-in closet and newly remodeled bathrooms; other upgrades include a brand new kitchen with quartz countertops, new floors, and new lighting throughout the house. In the back you have a 2 Car garage and an additional 2 story living quarters that comes includes a bedroom upstairs a remodeled bathroom, new floors and lighting. The huge entertainer's backyard is perfect for owners who want to enjoy their time under the patio, using the built-in fireplace & grill.You won't want to miss your chance at this one.

$1,088,000
3 Beds ⋅ 2 Baths ⋅ AR22110106 MLS ⋅ Active Status
Nestled in the heart of Emery Tract, this tastefully remodeled Spanish style home is ready for its’ new owner. Upon entering through the original arch doors, you are greeted with an open concept living area with a large picture window that allows an abundance of natural light to full the living room with warmth. Then as you navigate to the dining room, you will find an open concept dining area that leads into the kitchen which is perfect for having gatherings. As you walk through the hallway, you will find the primary bedroom with a primary bath and walk-in closet, and two additional bedrooms and a hallway bathroom. Each room is equipped with its own split heat and air unit perfect controlling energy usage. No expense was spared to update the plumbing throughout the property with PEX plumbing and fire sprinkler system, the electrical throughout the home has been updated with new electrical wiring and meter, and new insulation has been installed to keep the temperatures just right 365 days a year. This newly remodeled home is waiting to meet its’ new owner. The backyard also has ample space for you to enjoy and entertain friends and family. This newly remodeled home is waiting to meet its’ new owner!

$1,298,000
4 Beds ⋅ 3 Baths ⋅ P1-9690 MLS ⋅ Active Status
Located in the desirable Lindaraxa park neighborhood, this lovingly maintained and expanded Spanish revival is on the market for the 1st time since 1978! The home has fresh int/ext paint and is full of character and custom details. The beautifully landscaped front yard welcomes one to the eclectic Spanish archways of the front covered porch. As the handsome front door opens, one is greeted by the newly refinished parquet flooring that sprawls throughout the public rooms. The light filled living room is adorned w/ 2 etched leaded window panes and a picturesque window of the front yard. Connecting via an archway is the inviting 'great room' with a stately fireplace and an adjoining dining area anchored by a new chandelier. To the left is a full bath containing retro black accent tile work and arched tub shower. Adjacent is a sunny bedroom with view of the front yard and another etched lead window panes. This room features gleaming refinished wood floors and is perfectly situated as a home office or guest suite. The East half of the home was expanded in 1990 as the new sleeping quarters. A second full bath with a skylight is centrally located off the hall servicing bedroom 2 & 3. The two spacious jr bedrooms are outfitted w/ newer LVP flooring, newer light fixtures and large mirrored closets. A pair of french doors lead to the huge, luxurious primary suite boasting sunlight through double etched leaded window panes and a window overlooking the private backyard. Newer LVP flooring and a sparkling chandelier adorn this sanctuary. The suite has a spacious custom walk-in closet and an ensuite bath w/ matching sinks and steps up jacuzzi tub shower. Back in the heart of the home is the efficient U shaped kitchen with a charming garden window and plenty of storage spaces. The breakfast bar is perfect for snacks and opposite of the counter is an extra large washer/dryer closet w/ accordion doors. The vestibule showcases a pair of french doors that open to the exterior of the home and the long cement gated driveway. There is a detached 2-car garage w/ a newer door with an auto opener. The large grassy backyard with citrus trees and a wall of colorful bougainvillea is perfect for entertaining and relaxation. Other highlights include a newer 80,000 BTU furnace, double pane windows, interior fire sprinklers,copper plumbing, LED recessed lighting, genuine Baldwin locks throughout and newer sprinkler systems for the yards. This lovely home awaits its new lucky owner!

$1,288,000
3 Beds ⋅ 2 Baths ⋅ WS22109782 MLS ⋅ Active Status
Rare opportunity to own on one of the quietest streets in the heart of Alhambra with the option to build out to whatever your heart desires! Dwelling unit situated in the front of a massive 10,000+ sqft lot, ripe for an ADU build out or entertainers dream space! Main home currently features 1,483 sqft Spanish style home that has served the owners for decades and currently looking for a new owner to do the same. Conveniently located to schools, restaurants and shopping. Not a chance to be missed!