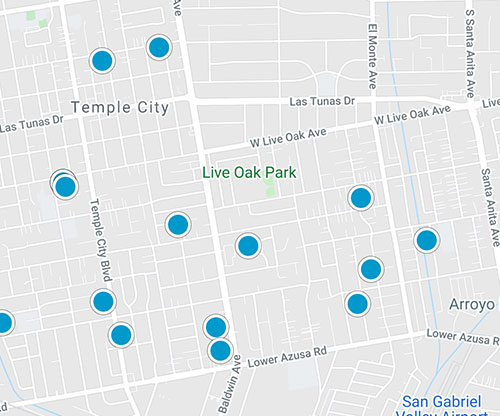 Started in 1923, Temple City was based on a simple, personal ideal. The man who lent the community his name, Walter P. Temple, imagined that the 400 acres of land he’d purchased four miles east of San Gabriel would be a working-class haven.

He wanted it to be a place where ordinary people with medium incomes could afford to live and buy homes of their own. He divided the acreage into lots and named the streets running between them after his friends, many of whom settled other parts of the San Gabriel Valley:  Workman, Kauffman  and Agnes, among them.

Today that dream remains largely unchanged, especially for the Asian, Middle Eastern and Latino immigrants who have settled there in pursuit of the suburban ideal. The median family income today is about $65,000 while estimated home or condo values have been estimated, in the past three years, at about $475,000.

With a population of about 38,000, the city doesn’t take a backseat to nearby Pasadena and its annual Tournament of Roses Parade. Where flowers are concerned, Temple City is known as the “home of the camellia,” and its annual Camellia Festival takes place at the end of February, starting with a parade at the corner of two of the city’s main streets, Las Tunas Drive and Rosemead Blvd.

Community spirit is also fostered by another longstanding event, the annual Saint Luke's Parish Fiesta, at Broadway and Cloverly Avenue, and last for three days.

Temple City ‘s commercial hub is also known as the “Bridal District,” which is located on a length of Las Tunas Drive. Shops offering dresses, floral creations and photographic portraits have turned this area into a veritable mecca for brides with some clients traveling from as far away as the East Coast .

Brides aside, next time you take a bite of that delicious doughnut, you might also think of Temple City. Though Winchell’s Donuts no longer has a store in Temple City’s city limits, its very first store opened there way back in 1948.

$788,000
3 Beds ⋅ 2 Baths ⋅ TR22174413 MLS ⋅ Active Status
Nice house in a nice place. Ideal Temple City near Arcadia. Located on a very private corner quiet street in the North Temple area. Additional parking is available in front of the attached 2 car garage and off-street parking is available. Ideal location close to markets, restaurants, banks, MRT Gold Line station and shops. Conveniently located to golf courses, shopping centers, hospitals and many parks. It is possible to add ADU!Excellent investment opportunity, this one will not last long in the market!

$758,000
3 Beds ⋅ 3 Baths ⋅ TR22172717 MLS ⋅ Active Status
This charming condominium is located in the desirable gated community of Linden Walk in Temple City. Developed by the well known Olson Company in 2015, it boasts elegant architecture and fine craftsmanship, a modern and open floor plan with plenty of natural lighting and is energy efficient with solar panels. This beautifully maintained home shows like new and features a chef's kitchen with a large island, sleek white shaker kitchen cabinets with soft closing drawers, stainless steel appliances and granite counter tops. Additional highlights include recessed lighting and designer chandeliers, an enclosed backyard, a spacious master suite with a walk in closet, master bathroom with dual vanities, laundry room located upstairs with easy access from each room, and an attached 2-car garage with built in storage bins for additional storage. Excellent management with low HOA dues, this community includes a playground, serenity park and BBQ area for all your needs. Conveniently located near shops, schools and transportation.

$828,000
3 Beds ⋅ 2 Baths ⋅ WS22169523 MLS ⋅ Active Status
Within the award-winning Temple City school district, this cozy Temple City home is up for sale. It's combined with 3 bedrooms and 2 full bathrooms including a huge master suite, two great sized guest bedrooms, a formal living room, an open kitchen and a breakfast area in the kitchen area. Open floor plan brings abundance of natural light. There have been plenty of upgrades done such as newer wooden cabinets, double panel windows, central A/C and granite countertops. Decent front and back yard with wide driveway and easy access. Nearly 7400 sq ft rectangle lot, Great potential for addition and ADU friendly. Two-car detached garage with a roomy shed behind it. A low maintenance backyard. Overall a gorgeous 3-bedroom cozy home with great functionalities and the most desirable neighborhood. It’s a great buy, Come over to see before it’s gone.