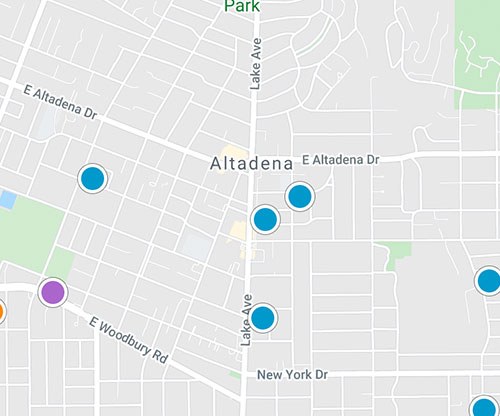 Talk about having the odds stacked against you: Altadena was founded on land that nobody wanted. Shaved off of a 14,000-acre Mexican land grant (the lion’s share went to the formation of Pasadena and South Pasadena), the land was considered too hard to reach – and too close to the mountains – to cultivate citrus crops.

But this unincorporated community of roughly 42,000 today has managed to thrive anyways in the shadow of Mount Wilson, one of the San Gabriel Mountain’s most well-known peaks and home to a famous observatory.

Altadena takes its name from a former business in the foothills there, the Altadena Nursery. The owner coined the term by joining the Spanish word “alta” for upper with “dena” as in Pasadena to the south: The two cities share a border, a school district and other cultural resources.

Ethnic representation in the city changed a great deal, especially during the 1960s (you can get an idea about the city’s demographics by looking at www.city-data.com); and vestiges of the past remain in the old mansions you’ll see on Mariposa Street near Santa Rosa Avenue—a location that became known as “Millionaire's Row” when various tycoons from the East settled there in the late 1800s and early 1900s.

Santa Rosa Avenue is also the place of another popular event: Pasadena might lay claim to the Tournament of Roses Parade, but Altadena has “Christmas Tree Lane”—one of the oldest, large-scale outdoor Christmas tree lighting events in the U.S.

What was long ago considered a problem for citrus growers—that Altadena was too close to the mountains—is now an advantage.

Today lovers of the outdoors will find plenty to do in Altadena, including hiking trails in Las Flores Canyon to the north and a botanical garden open to the public. The Sam Merrill Trail, which starts just north of Altadena, takes hikers up to the ruins of the historic Mount Lower Railway, which once shuttled passengers to several resorts built in the foothills.

That trail not only provides hikers with a good workout: It acts like a time machine, giving them a glimpse into the area’s not-so-distant past.

$1,188,000
2 Beds ⋅ 2 Baths ⋅ 22160427 MLS ⋅ Active Status
Tucked away on a private cul-de-sac near the top of Altadena's Christmas Tree Lane, this lovely home sits on a majestic and near 1/2-acre property in the foothills. A gated entry encloses the large front yard with room for grassy play, dining and mountain and starlight views. Enjoy numerous California Oaks, orange trees, a lemon tree and a kumquat tree. The large flat back lot is prime for a future build and/or expansion. Truly one-of-a-kind, the home boasts a gracious layout with two en-suite bedrooms, both with walk-in closets and modern bathrooms. New flooring throughout. Central a/c and heat. Quartz counter-tops in the kitchen and solid wood cabinets round out your open floor-plan kitchen. Windows throughout open up to breathtaking mountain views. There is an additional detached bonus room perfect for office or exercise. The finished garage might be the perfect space for a fitness room or art studio. Relax on your flagstone patio surrounded by flowering bushes while you enjoy a view of the beautiful rose garden and year-round blooming bougainvillea. More than enough room for expansion, addition, AND ADU potential. An absolute must see! Information deemed reliable but buyers to verify to their satisfaction. Offers requested by Wednesday, June 1 @ 5pm.

$1,398,000
4 Beds ⋅ 3 Baths ⋅ PF22102175 MLS ⋅ Active Status
Welcome home to a wonderful property nestled in one of Altadena's cherished neighborhoods. A quintessential example of today's indoor/outdoor lifestyle, the offerings of the property are endless...great entertaining, a simple gathering, secluded outdoor spaces, room for an extended family, and so much more. Secluded down a private driveway, the 2,410 sq ft house features four bedrooms, three bathrooms, a great renovated gourmet kitchen with stainless steel appliances, wine frige, and a large pantry, a large and bright living/dining room space featuring rich wood built-ins and a stacked brick fireplace and a wall of glass opening to the beautiful pool & spa that has both a gas and solar heater! Outside, you're presented with room for entertaining surrounded by a thoughtfully manicured and colorful garden of drought tolerant landscaping. Resting on a 8,040 sq ft lot, the home also features a large den with a fireplace and french doors opening to another enclosed outdoor space. Two of the separated bedrooms share a renovated bathroom and each have doors opening to yet another great outdoor patio garden space. Additionally, above the large two-car garage is a nearly 20'x10' loft space that could be a great classroom, studio, home office or perhaps just an abundance of extra storage. Recent work includes new carpet and fresh paint, and a new roof and rain gutters in 2020. Don't miss everything this wonderful home has to offer.

$1,600,000
4 Beds ⋅ 3 Baths ⋅ P1-9668 MLS ⋅ Active Status
A Gorgeous Traditional home in the Altadena Country Club area that has been beautifully remodeled with character and charm in a park like setting. This home features includes 4 bedrooms, 3 full bathrooms, family room, updated kitchen and wood flooring throughout. As you enter the home you are welcomed by a private courtyard with lush landscaping and trees. Home features include a formal living room with a large picturesque window, dining room and family room, gourmet kitchen with granite counter tops, stainless steel appliances, oversized refrigerator, breakfast bar and pantry. With 2 primary suites upstairs and 2 bedrooms downstairs, the upstairs grand primary suite has vaulted ceilings, oversized closet, French doors that lead to a private balcony. A beautifully remodeled master bathroom with dual sinks, bathtub and separate shower. The 2nd master suite has 2 closets and a remodeled bathroom. 2 large downstairs bedrooms with updated bathroom that has a farmhouse sliding door. Family room with French doors that leads to a tranquil and lush backyard with fruit trees. Other features include newer dual-pane windows, hardwood flooring, central A/C and heat, 1 car attached garage, driveway and washer/dryer and appliances included. This is a one of a kind opportunity to live in a beautiful remodeled home nestled in the foothill area of Altadena.

$865,000
4 Beds ⋅ 1 Baths ⋅ DW22107648 MLS ⋅ Active Status
Welcome!! Welcome !! to the Beautiful city of Altadena .This charming Home consists 4 bedrooms 2 bath nice kitchen, Separate dining area and living room, Also a great Back yard for hosting Barbecues with the Family and friends . Located in a very nice quiet area of Altadena. A must see don't lose the opportunity to own this pride of ownership . Won't last long !!

$985,000
3 Beds ⋅ 2 Baths ⋅ 22159147 MLS ⋅ Active Status
This charming 1940's traditional home is light-filled with an open-functional floor plan and hardwood floors throughout. The home features 3 bedrooms with 1.5 baths, living room with central red-brick fireplace, custom window built-in shelves, dining area and open-flow kitchen with gas oven/range. A beautiful mature tree stands stately and provides shade on warm summer days and lush greenery welcomes guests upon arrival. The backyard provides ample space for entertaining, play, gardening or possible expansion. The detached garage has laundry (check with city on the possibility of converting to an ADU). A great starter home as-is or bring your designer for inspirations on personalizing it to meet your current day needs. An easy location; walkability to local hiking trails, closeby to downtown Altadena, Pasadena and a quick commute to DTLA. Upgraded electric panel and water heater. Trust Sale.