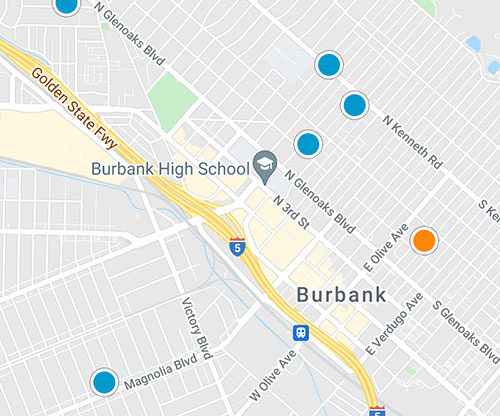 Nearby Glendale might claim connections to various major entertainment companies, but Burbank is the king in this industry: There’s a reason why Burbank is known as the “Media Capital of the World.”

Just to the northeast of Hollywood, Burbank is home to the headquarters of some of the biggest media and entertainment companies in the world, including: Warner Bros., NBC Universal, The Walt Disney Company, ABC and, for the kiddies, Nickelodeon and Cartoon Network Studios.

Even if you’re unfamiliar with these companies, chances are you know that Johnny Carson (and Jay Leno after him) have made Burbank the home of NBC’s long-running “The Tonight Show”—and so do about 104,000 residents today. 2009 census figures show that the median household income of families in Burbank is about $67,000 while estimated home values in the same year were about $587,000.

Named after a shrewd dentist who bought up Mexican rancho lands in the mid-19th century, the city of Burbank is divided into two primary regions—its downtown and civic center are located on the slopes and foothills of the Verdugo Mountains while the rest of the city occupies a stretch of flatlands at the eastern edge of the San Fernando Valley.

The entertainment industry isn’t the sole reason why Burbank’s community has grown over the years. Long before the big screen—and its cousin, the TV screen—took over, Burbank became a center for aviation with prominent companies like Lockheed establishing themselves in the community. The city also maintains one of the older airports in Los Angeles history, the Bob Hope Airport (for many years known as the Burbank-Glendale-Pasadena Airport), which opened in 1930.

The community offers something for everyone—along with the entertainment companies, Burbank boasts its own philharmonic orchestra, equestrian center, fine restaurants, the Downtown Burbank Mall, a "Burbank Village" shopping district and many parks and libraries. The community is also aided by several hospitals, including Providence Saint Joseph Medical Center, and academic institutions including Woodbury University and the schools of the Burbank Unified School District.

Despite the sprawling nature of the many companies in Burbank, you can still find that cherished small-town ideal in the city’s Magnolia Park area, whose borders include West Verdugo Avenue on the south and Chandler Avenue in the north. Many of the homes date to the 1940s, and the small shops and businesses in this shaded area contribute to that homey, 1950s-era atmosphere.

$1,249,000
3 Beds ⋅ 2 Baths ⋅ SR22110264 MLS ⋅ Active Status
Welcome to 2025 N Pass Ave, this newly remodeled cozy pool house in the city of Burbank. This property boasts a 3 bed 2 bath fully remodeled with custom windows, kitchen and bathrooms. The roof tiles are brand new, including AC/Heating and Electrical Wiring, all new flooring and appliances. Appliances are included in the purchase price. The pool and the backyard have been redone. All new lawn and decorative trees with custom front Facia. Come check out this ready to move in Beauty.

$955,000
2 Beds ⋅ 1 Baths ⋅ BB22110187 MLS ⋅ Active Status
Perfect starter home in the much sought-after Magnolia Park Area of Burbank. This Ranch Styled home has been lovingly cared for and has several important updated components making it a turnkey situation or a cosmetic fixer if you want to update to your own taste. As you approach the home it has a wonderful large porch, perfect for morning coffee or an afternoon tea break. When you enter the home a comfortable bright living room with newly installed engineered wood floors and gas fireplace. Formal dining room with original built-in shelfs keeping its original mid-century charm leads into a bonus room that can be used as an office/reading room. The kitchen has its original cabinetry and tile counters. Large grassy backyard and patio area for outdoor entertainment, new owner can even consider installing a pool. List of important updates include newer double pane windows, new engineered wood floors, copper plumbing, central AC/Heat, rollup garage door and newer roof. Lot size has potential for adding onto the home and ADU option.

$1,290,000
4 Beds ⋅ 2 Baths ⋅ 22160407 MLS ⋅ Active Status
Calling all investors! Looking for a fixer upper in an excellent location with amazing upside potential? Eureka! Located just a half a block from the Chandler Bike Path, and within minutes of the studios, dining, and shopping; this Burbank opportunity offers 3 bedroom (possibly 4), 2 bathrooms, and almost 2,000 square feet of living space. This investor special is being offered as-is, no repairs. Due to the property condition and damage (see attached photos), no FHA offers can be entertained. Cash and/or hard money financing are preferred; no owner financing or lease options. The property is priced aggressively. This is NOT a foreclosure, pre-foreclosure, or short sale. We can accommodate an expedited closing. Again, this is an as is sale; the property needs some TLC. Bring all offers, within reason. Bids under asking price will not be entertained for the first 14 days.

$1,425,000
SR22109767 MLS ⋅ Active Status
This duplex is located in a quaint neighborhood in Burbank. It was recently updated and some of the renovations include a new electrical panel, central air and heat in both units, recessed LED lighting throughout both units, a washer and dryer in each unit, a dishwasher and updated kitchen and bath in both units, new plumbing and a new sewer line. Both units have all brand new dual paned windows, as well as hardwood floors throughout. The front unit is tenant occupied, while the back unit is ready for a new tenant or owner/user! You won't want to miss this investment opportunity!