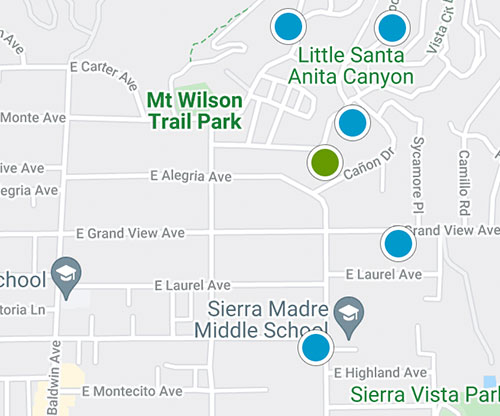 The name Sierra Madre might celebrate the majestic mountain range forming a backdrop to this lovely, little community, but the city prides itself on being known as the “Village of the Foothills.”

“Village” is a key word, because this town nestled in the San Gabriel Mountain foothills between Pasadena and Arcadia has retained a village sense of community and intimacy despite being part of the greater metropolitan area of Los Angeles.

Partly that has to do with the layout of Sierra Madre’s neighborhoods – small streets, old trees and old homes (many designated as historic landmarks), no traffic signals, a volunteer fire department – and partly it has to do with the dedication of residents, who’ve worked hard to preserve and protect the city’s heritage. One point of pride is the bell tower that houses the original school bell used by a schoolhouse in 1885.

Like many other cities in the foothills of the San Gabriels, Sierra Madre was formed from land once belonging to large Mexican ranchos. Though a settlement grew there in the late 1800s, the city itself wasn’t incorporated until 1907: By that time the population totaled about 500 people (today, by comparison, that number is closer to 11,000).

Visitors will find a business center consisting mainly of small merchants, restaurants and mom-and-pop stores. All of this encourages foot traffic and strolling, and the city has capitalized on this quaint leisurely appeal with a number of regular events, including: an Independence Day parade and festivities; and the annual Wistaria Festival (the wisteria vine has long been associated with the city).

But for walkers who want a more strenuous challenge, plenty of wilderness and canyon trails will take them up into the foothills.

Students attend schools in the Pasadena Unified School District, which serves Sierra Madre; and there are a host of churches of various denominations.

Also located within the city limits is the Mater Dolorosa Monastery, a lovely Catholic center in the hills where monks lead retreats, but that’s not all. It has also been known as a place where football teams participating in the Rose Bowl have stayed: An ideal place for players to meditate and rest up on the night before the big game!

$1,320,000
3 Beds ⋅ 2 Baths ⋅ AR22106900 MLS ⋅ Active Status
Adorable and charming cottage nestled on a treelined street in wonderful Sierra Madre. This turnkey property is situated on deep flat lot (9,500+ sq/ft) with the potential to expand. This home was extensively renovated in 2019/2020 featuring a primary bedroom with ensuite bathroom and large walk in closet. Second bedroom is perfect for a guest room or nursery with a walk in closet. There is also a second tastefully remodeled bathroom. A den with views of the picturesque backyard is perfect for an office. All windows have been replaced with dual pane glass. Central air and heat system controlled by smart thermostat was installed in 2019. A new water heater was installed with updated plumbing and copper piping. Smart home setup with Ring door camera, Kasa controlled interior/exterior lighting, Orbit sprinkler unit and ADT monitored security system. Recessed lighting were installed throughout the home. Kitchen features new flooring and brand new stainless steel appliance (range, range hood, refrigerator, sink, faucet and garbage disposal). The breakfast nook area leads to the well maintained backyard with blooming flowers and matured trees. Exterior of the house was recently painted including the front porch and detached storage shed. Long driveway can easily accommodate four vehicles and has the security/convenience of an automated gate. Home is conveniently located within walking distance to downtown Sierra Madre, parks and library. This is the perfect home for you to build long lasting memories.

$1,950,000
5 Beds ⋅ 5 Baths ⋅ P1-9555 MLS ⋅ Active Status
A breathtaking backdrop of the San Gabriel Mountains presents this impressive 2-story Colonial sitting on a quiet lane surrounded by stately homes in the charming city of Sierra Madre! This home boasts elegant formal rooms and yet an open flow from the casual spaces into the expansive yard! The formal entry offers elegant slate flooring, a powder room for guests and a wood banister staircase. Wood framed windows & built in cabinetry spanning the entirety of the focal wall embraces the traditional fireplace with a wood mantle in this substantial living room. The den boasts an enticing built-in wet bar with mirror backing & glass shelves, a plethora of built-in cabinets & glass sliders leading out to the yard. The dining room is a bright and yet intimate space that lies right off the spacious kitchen, featuring sturdy wood cabinets, tile countertops, & a generous breakfast nook just outside the luminous sunroom transitioning to the extensive backyard. A family room right off the kitchen is distinguished with a sweeping brick fireplace, as well as access to the downstairs bedroom, complete with a private bathroom. Upstairs, you will find 4 generous bedrooms and three bathrooms, including a spacious master suite! Outside, the yard is an entertainer's delight, flaunting a sparkling pool with a spacious patio right off the cabana featuring changing rooms and a sauna. Wood fencing scattered with creeping fig, encompasses a vast lush grassy area on this expansive lot!

$1,850,000
3 Beds ⋅ 3 Baths ⋅ PW22098619 MLS ⋅ Active Status
Traditional French Country Cottage, with its generous set back from the street and breathtaking views of the San Gabriel mountains, the approach to the residence begins at the semi-circular driveway which passes by the red-brick enhanced main entry, and continues along the east side of the home, and under to the carport to the rear and terminates at the detached, oversized two-car garage. The abundance of verdant landscaping affords the front entrance a level of seclusion that can found, found throughout upscale communities. Enjoy the fully fenced yard with its generous, finely trimmed lawn and mature landscaping; perfect for entertaining. This home is a must see and ready for your personal touch. Enter the front door and become inspired with the dramatically domed, high living room ceiling, accented by the domed picture window; reminiscent of an of solitude still found in the communities cradled by the San Gabriels. The prominent picture window is complimented on both sides with recessed bookcases. The fireplace with its marble mantle and pilasters is the perfect finishing touch for this well-appointed living room that is sure to impress. Many rooms feature wood flooring. Pass through the expansive archway into the dining room where the glittering chandelier and abundant windows and French doors compete to provide the most lighting. The French doors lead out to the front and side of the home. The home features 3 bedrooms and 3 bathroom, 2 of which are en-suite bedrooms with generous walk-in closets and views of the backyard and the San Gabriels. The formal study is tastefully accented with built-in, dark oak bookshelves and cabinets and the ceiling with its exposed dark oak beams. The bay window seating area is the perfect space for reading and reflection. The kitchen features a peninsula-positioned cooktop and large, black and white, checkerboard flooring. The cabinetry has clear glass doors The butler’s pantry features generous sized countertop, ample drawer space and wall-to-wall, eye-level cabinetry with clear glass facings. The central hallway features crown molding and classic wainscoting with wall mounted light fixtures. Located in close proximity to charming downtown; explore shops, restaurants, parks, famous hiking trails, schools, and the celebrated Sierra Madre Playhouse.

$1,050,000
3 Beds ⋅ 2 Baths ⋅ AR22099117 MLS ⋅ Active Status
Views, views, and more views. A stunning mid-century single-family home with a GUEST HOUSE located in the sought-after Marlboro Terrace neighborhood of Sierra Madre (also known as the Upper Canyon). The MAIN house (1,515 sq. ft.) has 3 bedrooms, 1.75 baths and provides expansive city and mountain views from every room of the house. As you enter the home you are greeted by an inviting open concept living room/dining room with a fireplace, which flows into the attractive kitchen, where you can’t help but be struck by the incomparable views of the mountains. The main floor also includes a master suite with views that expand across the canyon, and a deck off the living room overlooking the San Gabriel Valley. The home includes central air systems, granite countertops in the kitchen, new flooring throughout the house, a renovated deck, and new exterior paint. As you walk down the winding path you can stop and read a book in the a quaint sitting yard. Continue to the GUEST HOUSE (337 sq. ft.) and you will be captivated by the lush greenery of this mountain paradise. The guest house has 1 bedroom, 1 bathroom, a kitchen, living room and a private deck. The guest house is used as a rental unit with SEPARATE gas and electric meters and its own postal address. Continue down the path to find a small trail, which follows a babbling brook straight to the historic Mary’s Market. This is one of the few properties that offers direct access from the Upper Canyon to the Lower Canyon. Welcome to your own slice of paradise!