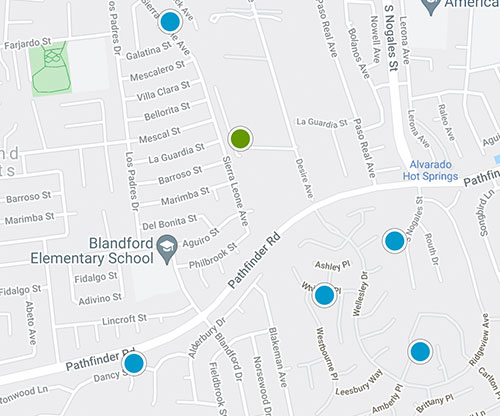 Like its neighbor to the east, Hacienda Heights, Rowland Heights is also an unincorporated community situated in and along the Puente Hills in the eastern part of Los Angeles County.

Rowland Heights is a popular destination for many in the San Gabriel Valley; in fact, it has been attracting many upper-middleclass Asian families since the 1980s (which is also true of its neighbor areas Walnut, Diamond Bar and Hacienda Heights).

Convenient shopping areas and good hillside homes (the estimated median house or condo value is about $461,000, as of 2009) have resulted in the population’s growth to just shy of 50,000 today.

Though it was once predominantly populated by anglo and Latino residents, Rowland Heights has evolved into a dynamic Chinese center of the county; Taiwanese families, in fact, comprise one of its largest groups today. That's good news not only for people interested in Chinese culture but also for any lovers of Asian cuisine, for the city has many restaurants and eateries catering to all sorts of tastes.

The adventurous diner can test his or her tastebuds at Supreme Dragon (which serves mainland-style Chinese dishes) on one day; on another day, Taiwanese-style dishes and other fare can be found in strip malls in the city; or head over to the Happy Harbor Seafood Restaurant or Coconut Bay Bar & Grill for a special treat.

Colima Road is one of the main street arteries, while the 57 Orange and 60 Pomona freeways provide easy access to surrounding areas in the valley and beyond.

With an estimated median household income of about $65,000, the community is also an educational haven. The area is served by an excellent school district, Rowland Unified School District, which boasts four National Blue Ribbon Schools and 16 California Distinguished Schools. The district – which also serves students in Walnut, La Puente and other surrounding areas – also has more Golden Bell awards than any other district in this region. Rowland Heights Ca 91748 homes for sale.

$1,198,888
4 Beds ⋅ 3 Baths ⋅ TR22175980 MLS ⋅ Active Status
**Come and see this beautiful home located in the 24 hour guarded Ridgemoore Community. This home has a 180 degree city view. It features 4 bedrooms, 2.5 baths and 3 attached car garages. As you enter the house, you will notice the house’s fresh coat of paint, the living room’s vaulted ceiling, tile floor foyer, laminated wood flooring and beautiful view. The family room has a fireplace and is a great size for family gathering. The kitchen, remodeled in 2019, has an updated granite countertop, white cabinets, newer like cooktop, upgraded range hood, new stainless dishwasher, built in oven and new microwave, and a spacious pantry. Both the family room and kitchen have direct access to the backyard where you can enjoy the beautiful backyard and city light view inside or outside. The laundry room includes new laundry sink set with stainless steel sink, quartz counter top, a large storage base cabinet, new faucet and pipes. It also has many top cabinets for additional storage. The house also re-piped in year 2019. The second floor features one full size bathroom with dual-vanities , 3 bedrooms and one large master suite. This master suite has large walk in closets, a full bath tub, walk in shower and and a breath-taking view of the city. This house is located near Community Regional Parks & Recreation center , Costco, supermarkets, shopping centers, restaurants with easy access to 60 & 57 freeways. It’s also within walking distance to the Blue Ribbon School of Blandford Elementary. This house has it all and won't last!

$1,599,999
5 Beds ⋅ 5 Baths ⋅ CV22152213 MLS ⋅ Active Status
Magnificent turnkey two story home is located in the Prestigious Waterfall Estates Gated community. The rare opportunity this house offers is that it has a PERMITTED 434 sqft standalone pool house, built in 2000 with it own AC system, recessed lights, etc, with a total living space of 4,463 sqft including the pool house, which can be used as a guest house, yoga/dance studio, office center, gym, party room, entertaining room, child care, in-laws, clubhouse, etc. The property is perfect for a multi generation family or living in main house and rent the pool house for rental income. As you enter the front door you're greeted by soaring high ceilings, an abundance of natural light & neutral colors with a separate living room with a formal dining area and family room. It features 5 bedrooms 4.5 bathrooms with Two master suites, downstairs and upstairs, with another bedroom suite, one Jack & Jill (bed/bath) suite and a spacious open den upstairs which is currently used as an office & entertainment room. Both master suites are huge: upstairs master suite with walk-in closet, double vanities, separate spa tub & shower; Downstairs large master suite with built-in cabinet and spacious retreat area. A Chef’s delight kitchen with center island, walk-in pantry, flows into the open Family room with a fireplace, all looking out at the serene views of the backyard.  Other features include Freshly painted exterior and interior, Tile, laminate and carpet flooring throughout, inside laundry room with built-in cabinets & sink. Nicely landscaped front and backyard with a Sparkling Pool & Spa, Mature landscaping, BBQ area, make it a great place to entertain family members and friends. Located in a very quiet end corner lot with only one neighbor on the right side in a Safe and Quiet Gated community, with low HOA dues, Award winning schools all in a Convenient location, steps to Recreation Park, few minutes to 60 & 57 freeways, golf course, walking distance to supermarkets, restaurants, bus stops. Please hurry and it won’t last!