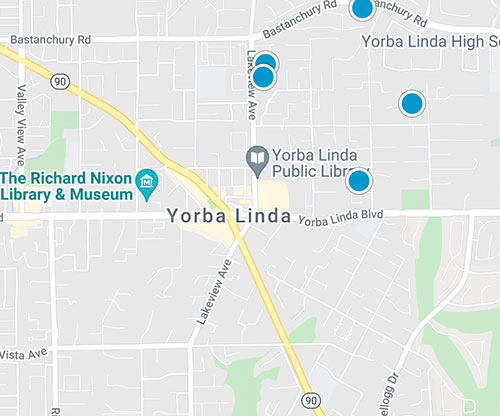 While its nearby neighbor, the city of Brea, prides itself on being a retail magnet for Southland shoppers, the city of Yorba Linda has held onto its rural roots by offering a living experience with plenty of horse trails and large residential lots.

That doesn’t mean there aren’t shopping and entertainment possibilities in this tranquil community northeast of Santa Ana in northeastern Orange County. Consumer needs are easily met by any number of outlets and stores at the Savi Ranch Center (just off the 91 Freeway at Yorba Linda Boulevard) and a number of smaller shopping centers throughout the city..

But there’s an exclusivity and privacy here that may explain why Yorba Linda has been ranked among the 100 best U.S. places to live by CNN and the U.S. Census Bureau considers it one of the richest cities in the U.S.

But the city today is a far cry from the place that Nixon’s family first saw when they settled there in the early 1900s. At the time, the area was a sparsely populated one -- Yorba Linda played an important part in the region’s booming citrus industry in the late 19th and early 20th centuries, and the land was planted with lemon and orange groves by the time the 37th president of the U.S. was born there in 1913.

Today, Nixon’s connection to Yorba Linda has been preserved by the Richard Nixon Presidential Library and Museum, which has been one of the city’s best-known landmarks and visitor sites since opening in 1990. There you find not only the graves of the president and First Lady Pat Nixon but also the quaint, little bungalow in which Nixon grew up.

Another focal point of the city for residents and visitors alike is Black Gold Golf Course, a 219-acre public course opened in 2001. The library, golf course and other destinations in Yorba Linda are easily within reach and just minutes away from the 57 Orange Freeway, which is west of the city.

Yorba Linda’s population, according to census figures from three years ago, is about 64,000, and the median household income is about $102,000 (the state average is about $58,000). Yorba Linda housing prices in that same census averaged about $674,000 as compared with the California average of $384,000.

As for education, Yorba Linda children are served by the schools of the Placentia-Yorba Linda Unified School District. Families also have the option of selecting from plenty of private schools, including Heritage Oak Private Education, several Montessori schools and St. Francis of Assisi School.

$775,000
2 Beds ⋅ 3 Baths ⋅ SB22107107 MLS ⋅ Active Status
Welcome to 8454 E Kendra Loop, a remodeled move-in ready townhome in the gated Tremont community. This unit offers panoramic canyon & city views and features 2 bedrooms, 2.5 bathrooms, and 1,596 sqft of living space. As you enter through the front door, you are greeted with a welcoming living area with high ceilings, fireplace, recessed lighting, and plenty of natural light. Enjoy the spacious dining area which opens to the kitchen with its large island, tile flooring, and another living/entertaining area which is currently set up as a home office. A convenient half bathroom is also located on this level. Head up the stairs to find the huge built-in desk at the top of landing, and a dedicated laundry room with side by side washer & dryer. Both bedrooms are on the top level and each has their own ensuite bathroom. The primary suite offers a walk-in closet, gorgeous views from the window, and an ensuite bathroom with dual sinks and separate shower & soaking tub. Additional features include two car garage with direct access, central heating and A/C, and a front porch. Conveniently located near Anaheim Hills Elementary School, Fred Barrera park, local hiking trails, and freeway/highway access, this is an incredible opportunity you do not want to miss!

$925,000
3 Beds ⋅ 3 Baths ⋅ OC22110916 MLS ⋅ Active Status
Highly desirable gated Tremont Community proudly presents this spectacular upgraded galore home that is tucked away in the serene hillside of Serrano Heights in Orange. Spectacular views of the mountains. Walking trails are just steps away from this PREMIUM PRIVATE END UNIT with high ceilings and windows galore bringing in an abundant of natural light into the home for all day brightness. Boasting a 3 bedroom 2.5 bath, this tri level town home has one of the finest location in the entire community. From the moment you step foot into this amazing home, you can tell the sellers are very artistic from every details of the interior. The inviting formal living room is fantastic for intimate entertaining. Step up to the formal dining room featuring a cozy two sided see through fireplace encompassing both the formal dining room and family room. Buyers, are you ready to entertain your guests? Check out what the sellers have transformed the space underneath the stairs! A UNIQUE CUSTOMIZED TEMPERATURE CONTROLLED WINE CELLAR! Talk about being CREATIVE! Make your way to the gourmet kitchen with granite counter tops and extensive cabinetry. Then enjoy the over sized kitchen island that has a built in eating area which opens wide to the family room with fireplace views. The gourmet kitchen and over sized kitchen island is perfect every chef in any household. Upstairs, be prepared to witness how impressive and amazing all the custom works the sellers have done. All bedrooms have customized tiled walls and closets. Master suite with customized walk in closet and is completed with a stunningly upgraded master bath featuring a MOSAIC ART copy from the Wynn Hotel, an enormous walk-in shower, separate soaking tub, double sink and high end bathroom fixtures. There is a full laundry room located upstairs. Oversized two car attached garage with direct access. Additional upgrades includes tile, wood and carpet flooring, recessed lights, plantation shutters, etc. Five minutes walk to Anaheim Hills Elementary school. A NATIONAL BLUE RIBBON elem school. Come see the privacy and luxury of this amazing home for yourself! Don't miss your chance to live in a beautiful home!