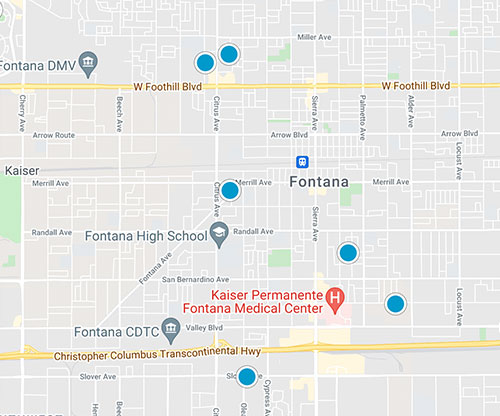 In San Bernardino County, Fontana is the meeting place for three of the Southland’s busy freeways – the 10, 210 and the 15.  That, along with the fact that this location makes the city advantageous for anyone moving goods around and out of the state, explains why Fontana today is an important regional hub of the trucking industry.

But the city’s distinctions go far beyond just interstate freight and 16-wheelers—Fontana also boasts the largest library system in San Bernardino County, the Auto Club Speedway (on the site of the steel mill that first employed thousands and swelled the city’s population in the early 20th century) and a premiere sporting event for footrunners.

Have you ever heard of the Fontana Days Half Marathon? If you’re a runner, you should: It’s the fastest half-marathon course in the world.

Nearly 200,000 people (according to a census two years ago) live in Fontana,  which was founded in 1913 as an agricultural community connected to the greater Los Angeles area by famed Route 66.  The climate there is warm and dry, especially when the Santa Ana winds pick up and start blowing in from nearby Cajon Pass (a vital link to Victor Valley, Las Vegas and other points beyond).

Fontana’s motto isn’t “city of action” for nothing—trucking is just one of the industries based there, along with large distribution centers for many companies, including Toyota, Target, Sears and Mercedes Benz. Another big boost to the local economy has been provided by the speedway, which draws thousands of racing enthusiasts every year.

One of the newest landmarks to adorn the city is the Lewis Library and Technology Center, an extraordinary cultural center opened in 2008 on Sierra Avenue in downtown Fontana. The $60 million facility, made possible by public and private funds, provides residents with a state-of-the-art place for study, computer use, tech support, a wide range of electronic databases and also an extended collection of  good, old-fashioned books.

There’s also a bookstore and a coffee bar—to provide the right amount of caffeine when scholarly energies are running low. Next door is the former Fontana Theater, which has been converted from movies to a dinner theater where spectators can enjoy live performances as they dine in an Art Deco-style atmosphere.

While the Lewis Library and the Fontana Theater both serve the needs of the mind, the body gets treated by Kaiser Permanente-Fontana Hospital, also in downtown. A number of neighborhood and senior centers across  the city also supply a variety of activities and services to residents to make sure that the “city of action” motto is true all year round.