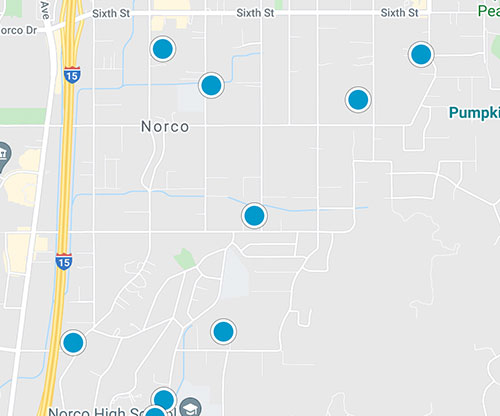 It’s not unusual that most cities in Southern California – or, for that matter, anywhere across the country-- claim special titles for themselves.

But in the case of Norco, two titles are especially appropriate: “Horsetown, U.S.A.” and “City living in a rural atmosphere.” After a visit to this community located in the western end of Riverside County, you’ll quickly understand why: The city sets a high premium on holding fast to its roots as a rustic, agricultural center.

According to a 2010 census, the city population is about 27,000 – and that doesn’t include all of the horses. You’ll discover plenty of horse trails and a general Western flavor to this town, whether you’re strolling by the shops in downtown that offer a variety of Western souvenirs and art, or attending one of the popular, regular festivities held  at the George Ingalls Equestrian Event Center at Sixth Street and Crestview.

The equestrian ideal is so strong in Norco, in fact, that the Silverlakes Equestrian Sports Park is now under construction: a massive 122-acre multi-use facility offering Olympic-quality features for a variety of venues – not just equestrian ones – such as soccer, lacrosse, football, field hockey and more.

In recent years, Norco’s median household income has been estimated at $78,000 while the estimated median house or condo value is $372,000. For commuters with jobs out of town, the city’s access to surrounding communities is made possible by the 91 and 15 freeways; in town, many find jobs with the Corona-Norco Unified School District, which is the area’s largest employer..

If you love your horse and prefer it to your car, Norco’s a good place for you. Thanks to hitching rails and corrals located by many businesses, horseriders can bring ole’ Bess into town any time they like..

The city also boasts several horsemen associations and has long celebrated  the joys of raising animals even though this has been contested – as in the case of developments in the Norco Hills, on the border between Riverside and eastern Corona, where new efforts to suburbanize the city are challenging the ideals of Norco's longterm residents.

One tradition that isn’t likely to be challenged, though, is the annual Norco Valley Fair, a four-day celebration in late summer. The fair harks back to a much simpler time in the city’s – and the region’s – history with a rodeo, cowboy poker, carnival rides, snail races (yes, snail races) and much more, not to mention a beauty pageant to crown the next “Miss Norco.” Norco, Ca 92860 homes for sale.