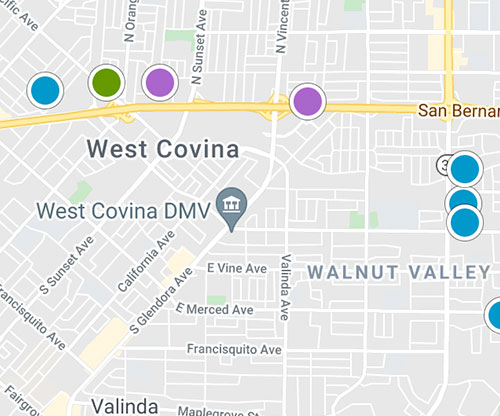 The middle-class suburb of West Covina might seem, from its name, to simply be a small offshoot of its neighbor, the city of Covina. But in fact West Covina is a much larger municipality, dwarfing Covina with a population of 106,000 people and a personality that is all its own.

Thanks to a post-World War Two surge in home-building, the city turned into one of the fastest growing cities in the United States during the 1950s. Today, West Covina is a dynamic, business-oriented community with well-maintained neighborhoods and an estimated median annual income of about $78,000.

That’s a far cry from its early days, in the 1920s, when the orange grove-dotted area that would become West Covina was in danger of being used by Covina as a sewage farm! That plan ended when the area was incorporated as an independent city in 1923.

The city’s more exclusive section is the South Hills area, which starts on Merced Avenue  and winds through hills before ending at Grand Avenue. That’s where you’ll find some of the most expensive homes in the San Gabriel Valley. This is also the location of the private South Hills Country Club and South Hills High School.

Located about 20 miles east of downtown Los Angeles via the 10 San Bernardino Freeway, the city has always strenuously promoted businesses and merchants, and today you will find a diverse, booming commercial economy. Not only has the city attracted businesses like Mercedes-Benz and Regal Entertainment, you’ll also find many smaller merchants thriving in several shopping centers, including Westfield West Covina (on the town’s west side) and Westfield Eastland (on the town’s east side).

Nearby is the Lakes Entertainment Center, which features the Edwards 18 Cinema as well as restaurants. If you’re looking for a more tranquil way to spend your  time, however, the city has also managed to preserve and protect a number of beautiful parks, including Ridge Riders Park and Big League Dreams.

For weekend warriors, there are also plans to eventually build a public 18-hole golf course in the hills overlooking the city. In West Covina, there are clearly plenty of activities and opportunities available for every taste and interest.