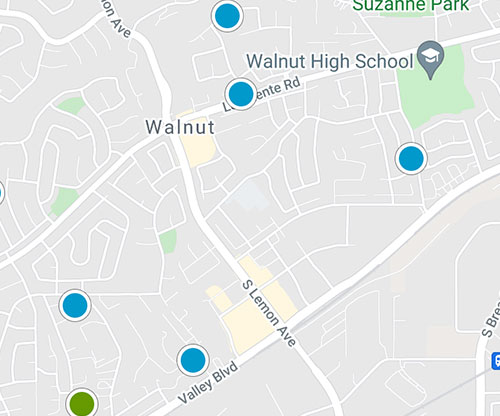 With the exception of a few busy intersections on Grand Avenue and at Mount San Antonio College, the city of Walnut has maintained a quiet, intimate atmosphere that is one of the main reasons why people are drawn to live there.

In recent years, Money magazine, in its listing of “America’s best small towns,” has given Walnut the ranks of 70 (2009) and 57 (2011)—the highest marks for a city in California during both of those years..

Walnut is a hilly, affluent city covering about nine square miles and having a population of about 30,000 people. The land of Walnut was carved from the same Mexican land grant, the Rancho Los Nogales, that formed the basis of nearby Diamond Bar.

That rancho’s name, translated into English, means “Ranch of the Walnut Trees,” and the city celebrates this heritage with the annual Walnut Family Festival, a day of celebration that features a parade and that highlights the city’s small-town appeal. The city also boasts some 26 miles of trails for hiking and equestrian activities.

Despite the emphasis placed on rustic, residential life, however, the city does have about 600 businesses, including ViewSonic and Shea Homes, which are both headquartered there.

Estimated household income, as of 2009, was about $100,000; and the Walnut Valley Unified School District serves students living in Walnut—and in Diamond Bar. Families also have access to Mount San Antonio College, a popular, respected community college, which is also located in the city near its border with the city of Pomona.  Walnut Ca 91789 homes for sale.