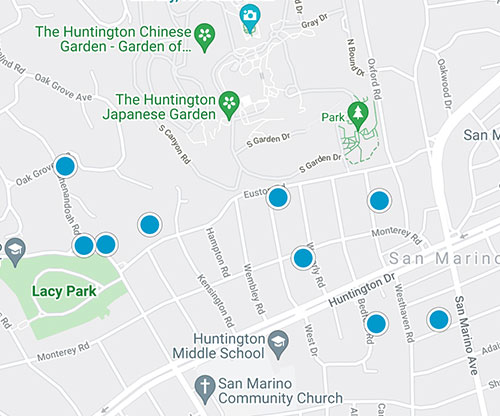 The history of this exclusive community is tied to the early history of the railroad in California and to a single man: railroad magnate and collector Henry E. Huntington.

Built on his San Marino estate, the Huntington Library, Art Collections and Botanical Gardens not only draws visitors (much like the Los Angeles Arboretum in nearby Arcadia): Thanks to the collection of scholarly materials, books and works of art amassed by Huntington during his lifetime, San Marino has become a mecca for scholars from around the world.

Along with the Huntington, this community bears witness to a gentrified past and an equally gentrified present. Here you find a city named after a famed Italian republic on the Mediterranean.

Drive down any of its main avenues (Huntington Drive) or side streets and you’ll see mansions with Georgian-style and California Spanish architecture, all suggesting why Forbes Magazine, in 2010, ranked San Marino as the 63rd most expensive city in the U.S. As of 2010, the city’s population was about 13,000.

The city’s planners designed San Marino to emphasize lush greenswards and beautiful gardens—something demonstrated by the 30-acre Lacy Park at the middle of the city. It offers another “arboretum experience” to strollers and their dogs too--provided that dogs are kept on leashes—all under the watchful eyes of a memorial to General George S. Patton, another former San Marino resident.

Patton and Huntington are hardly the city’s only two claims to fame, however: the home of the great astronomer Edwin Hubble is found in San Marino; and the Old Mill, the oldest commercial building in all of Southern California (it was used by Mission San Gabriel for grinding flour) is found in San Marino as well.