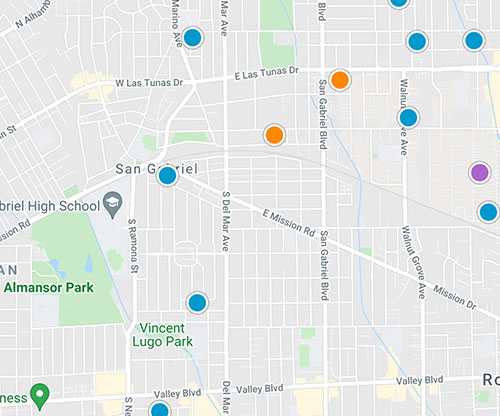 Unlike the other cities of the San Gabriel Valley, the city of San Gabriel has a unique institution at its center: the Mission San Gabriel Arcangel, the settlement founded by Franciscan missionaries in 1771 as part of Spain’s effort to colonize California.

That founding date of 1771 is a little misleading: The mission was first planned and built elsewhere before a destructive flash flood forced the missionaries, a few years later, to relocate and rebuild in its present location on South Mission Drive. The city’s often regarded as the birthplace of the Los Angeles metropolis thanks to the Mission, which created a thriving economy in the region’s early days.

Proud of its Spanish roots, the community hosts a number of Spanish-themed celebrations throughout the year. The history of California can be seen on the stage in the elegant, genteel Mission Playhouse, and various walking tours take visitors past interesting historic spots as well as small shops and stores that are part of the city’s sturdy retail industry.

Families send their children to schools in the San Gabriel Unified School District or to one of several private schools in the area, including the San Gabriel Academy.  The school district consistently receives good marks as one of the state’s top districts, while Gabrielino High School has been honored by U.S. News & World Report as one of California’s best public high schools.

Listing courtesy of Listing Agent: Tracy B Do from Listing Office: Compass