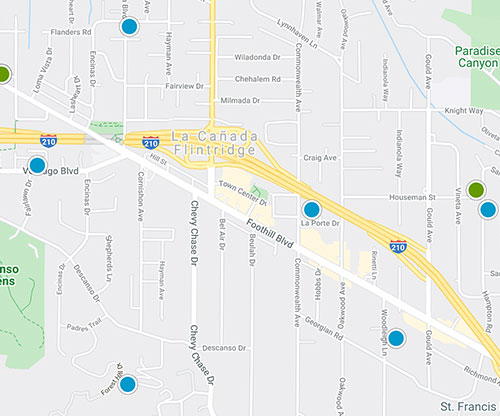 At the far western edge of the San Gabriel Valley, the affluent city of La Cañada Flintridge is connected to the rest of the valley by the 210 Foothill Freeway.

Bordered to the south on three sides by Altadena, Pasadena and Glendale, the city’s neighbor to the north isn’t another city but the Angeles National Forest. The city’s elevation reflects this geographical situation, varying from about 950 feet above sea level to, at its highest, about 2,400 feet.

Unlike most of its neighbors, whose incorporations took place about a century ago, La Cañada Flintridge’s occurred more recently, in 1976, with the joining of two smaller communities, La Cañada (which comes from the Spanish for “canyon”) and Flintridge (named for developer and U.S. Senator Frank Flint).

The city has about 20,000 residents, and in 2010, Forbes magazine ranked La Cañada Flintridge as the 143rd most expensive city for living in. That distinction comes with many qualities that the city is proud of: the Flintridge Riding Club, the Flintridge Preparatory School, Flintridge Sacred Heart Academy, Descanso Gardens and NASA’s Jet Propulsion Laboratory.