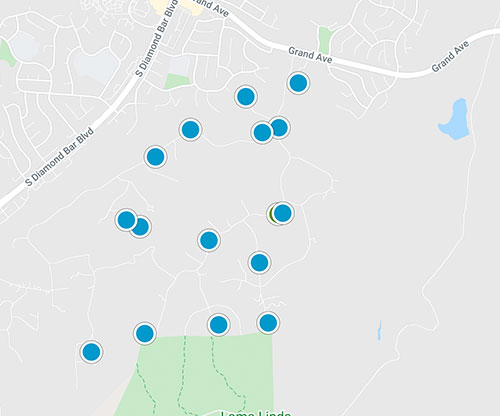 The city name of “Diamond Bar” goes to the very heart of the early history of this city, located at the intersection of the 60 Pomona and 57 Orange freeways in the southeastern end of the San Gabriel Valley.

For much of its life, Diamond Bar had been a ranch for raising cattle, and the brand used by ranchers showed the mark of a diamond over a bar shape.

Like most of the other San Gabriel Valley communities, Diamond Bar emerged from one of the land grants given to landowners in the days when the region belonged to Mexico.  Diamond Bar is formed of lands in Brea Canyon and the eastern Walnut Valley that had once belonged to the Rancho Los Nogales—the “Ranch of Walnut Trees.”

In the subsequent years of Mexican and American ownership, the lands would be parceled and passed through many hands, with the Diamond Bar Ranch serving as the largest section. In the 1950s, the ranch lands were again purchased with a residential plan in mind: to create a master-planned, rural community 27 miles east of downtown Los Angeles. The actual city itself wasn’t incorporated until 1989.

That ideal is much the same today, for Diamond Bar remains a mostly residential city with some shopping centers and commercial development scattered throughout the city and along the 60 Pomona Freeway.

The city also features a public county golf course, and the cities that surround it include Brea, Walnut and Chino Hills. The city's main road, Diamond Bar Boulevard, winds through the valley that eventually becomes Brea Canyon, and housing on the surrounding hills overlook this boulevard.

Two school districts—Pomona Unified and Walnut Valley Unified—provide educational services to Diamond Bar families, as well as several private schools. The population of Diamond Bar is about 58,000, and the median household income is about $88,000. The estimated median house or condo value is about $491,000, according to a census conducted three years ago.

Today, the community includes many affluent Asian-American families who call the city their home, drawn by the prestige associated with that same familiar diamond-over-a-bar shape that ranchers used long ago.