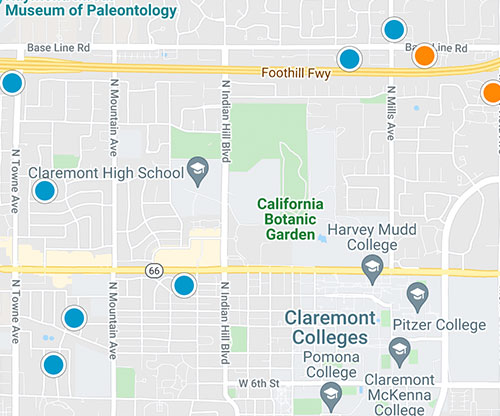 If the city of Claremont could have a new slogan, it would have to be a description often used by residents: It’s the city of “trees and PhDs.” That’s because this small, affluent city at the foot of the San Gabriel Mountains in the eastern part of the San Gabriel Valley is renowned for its educational institutions and its leafy, tree-lined streets.

As of 2010, the population was listed as 34,926: The city is mainly residential with a mix of older homes in the community’s south, and larger, newer tracts built just north of the city. The city also includes several retirement homes, including Pilgrim Place and the Claremont Manor.

Much of the city’s quaint, old-style charm comes from the seven schools known as the Claremont Colleges –Pomona College, Claremont Graduate University, Scripps College, Claremont McKenna College, Harvey Mudd College, Pitzer College, and the Keck Graduate Institute of Applied Life Sciences. The schools date to the 1880s, when Pomona College was founded, and their total overall enrollment is small, about 6,500 students. Other educational and intellectual centers in the city include the policy thinktank the Claremont Institute and the Claremont School of Theology. A popular hub of social life in the city is “The Village,” the cluster of streets of shops and restaurants located near the colleges.

Located about 30 miles east of downtown Los Angeles, Claremont sits between two major freeways—the 10 and 210—and Metrolink trains provide commuters with an easy alternative to driving. Claremont has a Metrolink station stop on the San Bernardino line, and this line runs daily, connecting travelers to Los Angeles and stops along the way.

Claremont boasts 23 city-owned parks and fields with 1,788 acres of public parkland (1,769 is wilderness). The city also has several nature habitats, including: Rancho Santa Ana Botanic Gardens, Robert J. Bernard Field Station and the John R. Rodman Arboretum. When you consider all of these offerings, you realize there’s a simple reason why this city has been a repeat winner of the Tree City USA Award from the National Arbor Day Association.  Claremont Ca 91711 homes for sale.