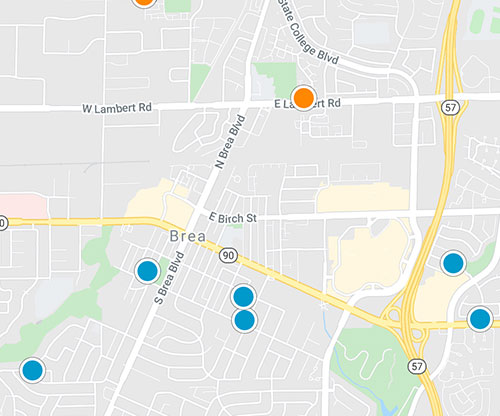 More than a century ago, people were drawn to the area known today as Brea because of deposits of crude oil.  Today, even though the city preserves that past history of “black gold” with its name – “brea” is Spanish for “tar” or “pitch”  – what draws visitors from around Southern California is this community’s vibrant shopping and cultural atmosphere.

Residents of Brea have the best of both worlds: They enjoy a small-town, intimate neighborhood experience alongside the advantages of living near some of the most popular retail and entertainment centers in North Orange County.

That unique vision of the community isn’t new – no, it was conceived long ago, in the 1970s, when the city first began its efforts to rebuild and reimagine life in Brea.

Today, thanks to that vision, about 40,000 people have decided to plant their roots there, while, according to city statistics, about 100,000 people visit the city daily for pleasure, shopping or work.

What are the hotspots? They’re not hard to find. Right off the 57 Orange Freeway, you’ll find one of them: the Brea Mall, one of the city’s signature retail centers.

But for people who love strolling in the open air as much as shopping, Brea provides a nice alternative. Check out the retail development in downtown known by locals as “Birch Street”  – more than 50 acres considered a consumer paradise, with a variety of entertainment and shopping possibilities. Billed by the city as a “village-style, pedestrian-oriented promenade,” this complex of stores and restaurants also features a movie theater and live entertainment in the form of the Improv Comedy Club.

Live entertainment of another sort can also be found at the Curtis Theatre, which is located in the city’s civic center; the theatre produces an annual slate of performances featuring local and national artists as well as Stagelight Productions and Brea’s Youth Theatre Program.

But artistic excellence in Brea isn’t found only on the stage of the Curtis Theatre or at the Improv; it can be found all over the city. In the same years when the city began its rebuilding in the 1970s, a public art program was started that continues today with some 140 works of art showcased in various corners of the city.

Along with the arts, education is another point of pride in the community, and schools in the Brea Olinda Unified School District have earned many distinctions, receiving Blue Ribbon and California Distinguished Schools honors as well as a a Title I Academic Achievement Award.

New and recent housing includes more than 660 housing units in the Olinda Ranch development (at the corner of Lambert Road and Valencia), and 54 single-family homes in the Walden Estates, which is situated on on the north side of Lambert Road east of Kraemer. The city has proposals for other developments on the table as well.

While the map of Brea might be dotted with plenty of historic homes, many built in the early years of the 20th century, something else is certain: the city of Brea's present and future are booming.